Skip to content
August 22, 2019 Detroit Media Magazine
The soundboard at the Motorcity Casino Hotel in downtown Detroit will always remember it’s first, as STYX played the sold-out soundboard for the first time themselves, a night to be remembered for sure. Tommy mentions of all the places they played here in Michigan and the soundboard wasn’t one of them until tonight. Shaw went onto saying how much they love Michigan, making note of how many times they played pine knob. People from all over the great lakes state and our neighbors to the north came in all age form to remember their first to. The Motorcity casino seat’s 1500 people making for intimate night of rock and roll. The night kicked off around 8:40 with loud cheers from the STYX faithful with the Chicago rockers opening with “Gone, Gone, Gone,” off their sixteen studio album titled “The Mission” which was released back on June 16, 2017. The 90 minute set was world class as only STYX can do consistently for 4 decades. The sudden strike of the keyboard lead the crowd to cheer loudly as “Lady” began to play with the fans joining in to sing with keyboardist Lawrence Gowan. The loudest cheers of the night came when founding member Chuck Panozzo walked onto the stage and played “Fooling Yourself” and Mr. Roboto. Speaking of members Tommy Shaw wasn’t one until 1975. Shaw got the call and was asked to come to Chicago with a major tour in the works. As Tommy tells the crowd he had free time so he went to Chicago. He was asked what you got. He delivered with a song he wrote called “Crystal Ball” some tweaks were made to the song and a true guitar legend was in the making for the band. A theatric version of “Rockin’ the Paradise” is always a crowd favorite with Gowan owning the stage with dance moves, playing the mounted keyboard every which way possible to even sporting the top hat, Gowan is a must see artist with high energy delivered nightly. The Canadian born singer noted to the crowd particularly up top that during sound check while sitting up there he noticed the sound difference and asked the crowd up top to drown out the bottom half during the Queen cover known simple as “Bohemian Rhapody”. Rejoining the band for “Come Sail Away” Panozzo and the boy’s were greeted to loudly, with another STYX faithful sing-a-long that was displayed with emotion and some goose bumps. After a very short break the encore part of the night was here. The two song encore opened with my favorite STYX song, which I’m sure I’m not alone on “Mr. Roboto” started to play. The power of music was felt with goosebumps by all standing and expressing with loud ear popping tones of Domo arigato, Mr. Roboto, Domo. STYX drummer Todd Sucherman voted best drummer in the world for classic music and also for best in the world for progressive rock music lead the crowd with a electric version of “Renegade” that closed out the night. STYX is one of the most professional and world class performers I’ve every seen. With no slowing down mentality the Chicago rockers will be around for awhile longer rocking out in a town near you. For more tour dates and merch here 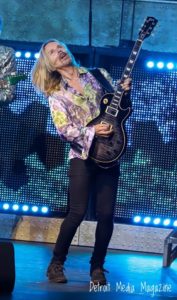