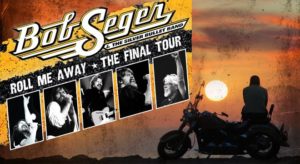 Michigan native Bob Seger is coming Home one last time, well playing any way’s. The legendary Detroit rocker will be playing his final two shows at DTE on June 6th and again on June 8th in Clarkston, Michigan. The rocker just recently added 12 more shows too his already successful tour. The Roll Me Away Tour (which was called the Travelin’ Man Tour when Seger originally announced it) has been that a success, playing to sold-out shows nightly. The two hour and 22 song tour will be a lasting memory for sure on his hometown fans’. The rocker announced he was retiring after more than 50 years of pleasing fans worldwide. Seger has been dealing with spinal problems and was told by his doctor to have surgery and time away to help correct the problem.

Sure to sell-out within minutes your not going to want to wait to see your last glimpse of the Rock n Roll Hall of Famer perform. Below are links to the tour and tour dates for the Detroit shows. Bob Seger and the Silver Bullet Band have played Pine Knob as local’s know it by, more than 25 times with a record eight shows played back in 1977. Don’t miss being part of this Rock n Roll memory.