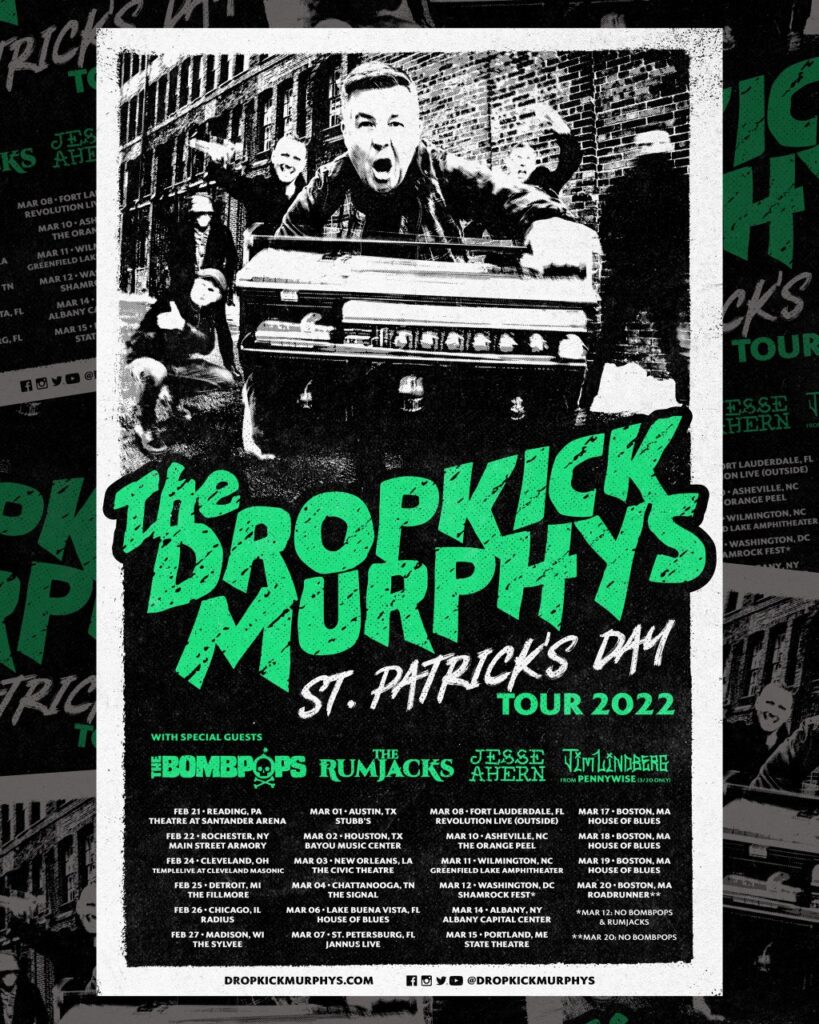 As the saying goes around here there “ain’t (yes I used ain’t) no party like a Detroit party and hopefully the Fillmore can keep up with the heavyweight Celtic punk band Dropkick Murphy’s when they come to town on February 25, buckle up Detroit and our friends from Canada and enjoy the show. The Quincy, Massachusetts band will be bringing their St. Patrick’s Day Tour to downtown Detroit, and you don’t want to be left out on this party. The last Celtic band I covered at the Fillmore was Flogging Molly and well let’s say things got out of hand and this show will certainly be no different. In the five years of covering shows at the Fillmore I never felt the floor shake to a point where you were bouncing up and down almost like an earthquake feeling, wow! The long-awaited tour will be cranked up no doubt with COVID keeping people on lockdown for so long it will be time to release some pent up energy.

The band was named after Dr. John “Dropkick” Murphy’s alcohol-detoxification facility. The “Dropkick Murphy’s” first started playing in the basement of a friend’s barbershop and soon began to tour and record and never looked back selling out all over world. Dropkick Murphy’s’ latest album, Turn Up That Dial, was released April 30 via DKM’s own Born & Bred Records and is their tenth studio album. Their latest album is all about the importance of music and that’s something we all definitely need is to feel good, music is good for the soul, to step back and decompress from the world. With two years of live streaming it’s time to put a smile on people’s faces and enjoy life again. Turn Up That Dial is their first since 2017’s 11 Short Stories Of Pain & Glory. The LP brings a healthy dosage of happiness to all. The tour kicks off February 21 in Reading, Pennsylvania and will wrap up with three shows in Boston starting on St. Paddy’s Day at the House of Blues.

In 2020, the band was one of the first to embrace streaming performances, starting with their Streaming Up from Boston St. Patrick’s Day virtual performance. It was followed by last year’s landmark Streaming Outta Fenway livestream, which drew more than 5.9 million viewers and held the #3 spot on Pollstar’s “Top 2020 Livestreams” chart. Dropkick Murphy’s St. Patrick’s Day Stream 2021…Still Locked Down, was #1 on Pollstar’s Livestream chart for the week ending March 22, 2021, logging over 1 million views. One of my favorite songs off of Turn up that Dial is Middle Finger, such a fun song loaded with a shit ton of energy, with good mood vibes, a drinkable song for sure Oi! The rest of the LP is crazy good and should be listened on a warm summer’s day with the top down and the system up. Oh, and make sure you have a full tank of gas you’re going to need it.