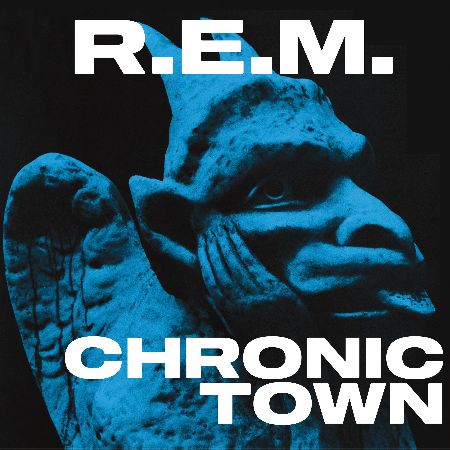 Celebrating its 40th anniversary this year, R.E.M.’s debut EP CHRONIC TOWN will be released for the first time ever as a standalone CD with extensive liner notes by the original producer Mitch Easter (Let’s Active). It will be released in three different formats: CD, Picture Disc, and Cassette on August 19, 2022 via I.R.S./UMe and can be preordered here.

Featuring such adored classics in the band’s repertoire as “Gardening At Night,” “Wolves, Lower,” and “1,000,000,” the five-song EP, as Rolling Stone noted, “served notice that R.E.M. was an outfit to watch.” As a debut release, R.E.M.’s Chronic Town became an anomaly… a record that didn’t quite fit into the constraints of what was played on the radio. So instead of trying to fit into a genre, R.E.M. helped create their own: College Rock. The follow-up to their breakthrough single “Radio Free Europe” which was released in 1981, Chronic Town served as the entry point to what would become one of Alternative Rock’s biggest bands. “One might fancifully say that Chronic Town was the sound of an expedition, ready for anything, setting forth,” says Easter fondly about the EP. “If R.E.M. ‘Radio Free Europe’ single was a signpost, the Chronic Town EP was the atlas.”

Critically hailed both upon release and in retrospect, Chronic Town heralded “a great band planting their flag in the ground, a historic landmark that portended great things that actually came” (Stereogum). The Stranger praised “everything about the EP, from its gnomic, blue-tinted cover art, to its restlessly discursive music, to the fact that the two sides both had their own titles (‘Chronic Town’ and ‘Poster Torn’), was not only good on its own merits, but an excellent influence in favor of obscurantism and understatement.” Chronic Town’s impact and influence on the future of alternative music is uncontested and described by Magnet Magazine as “essentially a template for the entire indie-rock movement.”