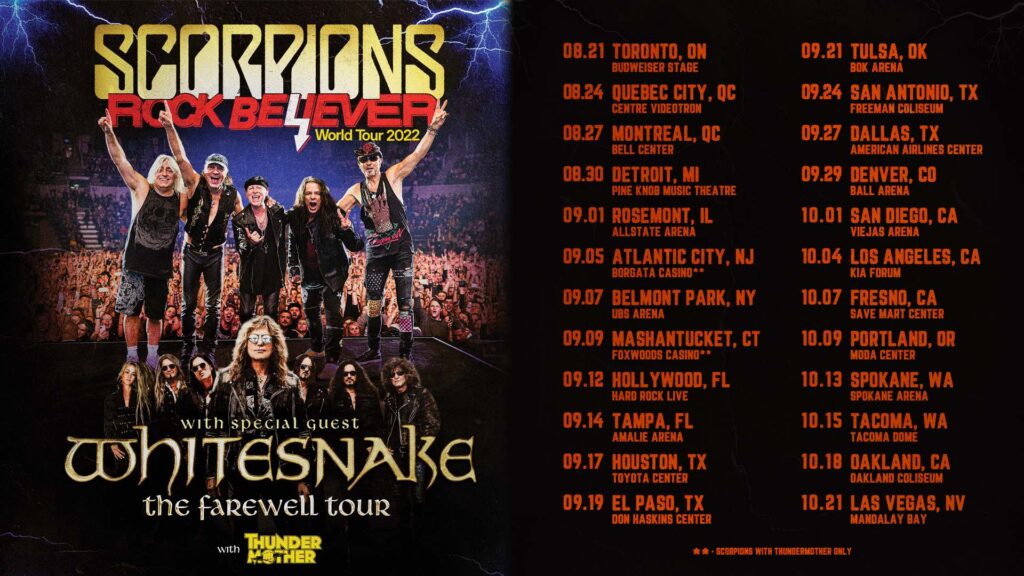 Scorpions have announced a 24-date North American tour, and they’re taking Whitesnake and Swedish rockers Thundermother along for the ride. The run of dates kicks off in Toronto on August 21, and wraps up in Las Vegas two months later, the city in which the band recently completed a nine-show residency. “After the amazing start we’ve had with our residency in Las Vegas, it‘s about time to come back for a real tour to rock the US like a hurricane again,” says Scorpions frontman Klaus Meine. “We can‘t wait to see all you Rock Believers out there!”

“Once again it’s time to feel the sting of The Scorpions and the bite of the Whitesnake!” exclaims David Coverdale. “Can’t Wait!!” News of the your is accompanied by a one minute video featuring a David Attenborough-style narration. “And with the new day emerges our planet’s most resilient hard-rocking creatures, Scorpions,” says the narrator. “These multi-platinum creatures rule the world of rock.”

Tickets for the North American leg of the Rock Believer tour will go on general sale on Friday, May 13 at 10am local time from Ticketmaster. Scorpions kick off their European tour this week in France. Full dates below.

The tour will be making a stop here in Michigan at Pine Knob this August.

Connect with the bands below:
Scorpions
Whitesnake