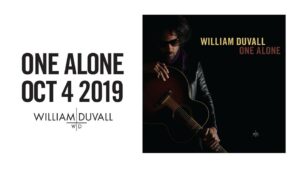 William DuVall’s ONE ALONE album will be released on October 4, 2019. Duvall will be on tour throughout the US starting in late October. This is DuVall’s first solo album, One Alone, a smoldering, all-acoustic affair. that will captivate you. One of the tracks of interest is ’Til The Light Guides Me Home, a song of redemption in the wake of tragedy. The song was inspired by a family break-up. DuVall’s music career started in the early 1980s on the Atlanta hardcore punk scene. He first performed with Awareness Void of Chaos. DuVall joined Alice in Chains as lead singer during the band’s reunion concerts in 2006, and made his first public performance with the band at VH1’s Decades Rock Live concert honoring Heart, in which he sang Alice in Chains’ “Rooster”. According to Cantrell, it only took one audition for DuVall to get the gig. I had the chance of seeing Duvall live this summer and he displayed true passion, emotion, while captivating the crowd. This is going to be a must see show for sure, Links are provided below with info.