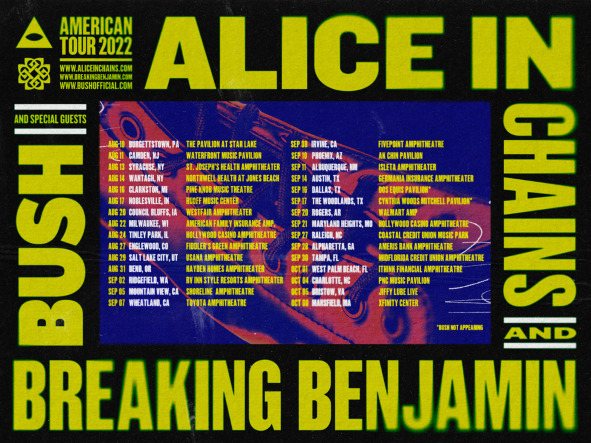 American rock bands Alice In Chains and Breaking Benjamin are joining forces for the first and heading out on a 30 city tour with special guests Bush the will land a stop at the newly renamed (except if your from around here it never changed) Pine Knob formerly (DTE) on August 16th, Tickets for this event go on sale this Friday at 10:00 a.m. local time with presale starting tomorrow. I have covered both bands and this is going to be a banger, buckle up for this one boys and girls. With over 30 years behind them and 30 million records sold, the upcoming tour marks Alice In Chains’ first tour dates in nearly three years and will come during the 30th anniversary of their landmark 1992 sophomore album, Dirt, which was released in September 1992. The last time AIC was here was back in 2019 with Korn talk about a crazy night.

“We’re looking forward to finally hitting the road again this summer,” said founding Alice in Chains drummer Sean Kinney. “It’s been too long and we can’t wait to get outdoors and share a night of music with our fans again.”

“We are so extremely excited to be hitting the road with Alice In Chains and Bush,” added Breaking Benjamin’s Ben Burnley. “It’s such an honor to share the stage with such amazing bands that we grew up listening to and have influenced us so very much! We can’t wait to see you all out there!” Breaking Benjamin will be in support of their most recent “Aurora,” along with other BB classics.