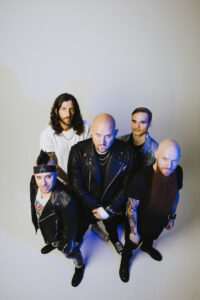 The song, which was described as “inspiring” by Loudwire and “explosive” by Alternative Press, appears on their John Feldmann-produced album Baptize, out now via Spinefarm. The track has been wholly embraced by fans and beyond, as it’s rapidly approaching the Top 10 at rock radio and has already accumulated a whopping 15 million streams.

“‘Warrior’ has been a beast of a track since its release,” the band says. “It’s been such an amazing thing watching it grow and connect with the people. The time has come for a fresh take. Enter Zero 9:36. Same great ‘Warrior’ taste. New and improved ‘Warrior’ flavor.”

Atreyu will also embark on the headline “The Baptize Tour” this fall. The U.S. tour kicks off on November 9 in Dallas and runs through December 16 in Santa Ana in their native Orange County, California. The trek will feature special guests Crown the Empire, Tetrarch, Saul, and Defying Decay.

Atreyu are eager to get back on the road and perform songs from the new record and their beloved catalog for their legion of dedicated fans.