After his September 2021 tour (including dates with Alan Parsons Project) was postponed due to COVID concerns, legendary drummer and musician, Carl Palmer will return this November to the US with his first round of live shows since 2019. These shows, which will feature only Palmer and his band, mark the return to live performances since the onset of the pandemic. The tour will kick off in Warrendale, PA on November Wed November 3rd, and finish just before Thanksgiving. Additional dates are being added to initial list of 14 shows listed here.

“Finally! The band and I are very eager to get back on stages in America, and around the rest of world, where possible,” said Palmer. “The show will have some material we have not played in years, as well as ELP’s best loved material. Visually, we will include footage in the show that reflects the highlights of ELP’s career.” In addition to Palmer, the band still features Paul Bielatowicz on guitar and vocals; and Simon Fitzpatrick on bass and Chapman stick.

Carl Palmer, who was voted by ROLLING STONE as one of the 10 Greatest Drummers of All Time, is a founding member of EMERSON LAKE & PALMER and ASIA. Since he began in the business in the 1960s Carl Palmer has sold over 50 million records! Since 2001, Carl has fronted a 3 piece power trio: guitar, bass, vocals, & drums doing the classically driven rock hits of ELP with NO KEYBOARDS.

These dates mark the beginning of three year drive to promote the 50th Anniversary and beyond of Emerson, Lake & Palmer, whose sole surviving member is Carl Palmer. Also planned during the celebration period will be a limited edition expansive biography of the band; a new Palmer art collection based on the five main ELP studio albums; a documentary; KARN EVIL 9, a major Hollywood film (now in development with Radar Pictures) and a special tour announcement that will reunite Palmer in performance with the late Emerson & Lake through modern technology. “This tour is beginning of a three year agenda,” explains Palmer. “There are many special celebrations of ELP that we will explain in detail in the near future.”

Welcome Back My Friends To The Show That Never Ends! 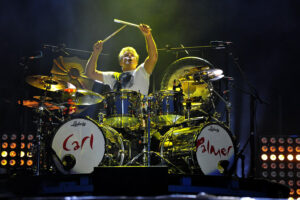