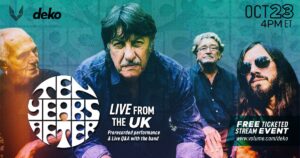 Ten Years After are best known for their Platinum selling album ‘A Space in Time’ which featured the Top 40 hit “I’d Love to Change the World”, and their prodigious performance appearance at the Woodstock Festival in upstate New York, August 1969. Their rendition of “I’m Going Home” was featured in both the subsequent film and soundtrack album and catapulted them to star status.

Original members Ric Lee and Chick Churchill have continued this legacy and are now rounded out by Guitarist/Vocalist Marcus Bonfanti and Bass Icon Colin Hodgkinson. The band recorded a live set in London during the lockdown and it now being brought to you as a free event from Deko Entertainment and Volume.com. It is being hosted by legendary Philadelphia radio personality T. Morgan and features the band playing classics like “I’d Love to Change the World”, songs from their latest release ‘A Sting In The Tale’, plus taking your questions in a live chat. This will give you the fan, a unique experience of delving into the bands history, and looking into what the future holds for Ten Years After.

It all happens Saturday October 23rd at 4:00 (EST). This is a free event and all you have to do is sign up and claim your ticket here:

Ten Years After released both “A Sting in The Tale” and “Naturally Live” both as “Deluxe Editions” in North America earlier this year through Deko Entertainment. “A Sting In The Tale” Featured new tracks like “Land of Vandals”, “Suranne Suranne”, and “Up in Smoke” and “Naturally Live” was recorded at HsD, Erfurt, Germany on 24th March 2018 and contains live recordings of old favorites such as “I’d Love To Change The World”, “Hear Me Calling”, “Good Morning Little Schoolgirl” and, of course, the Woodstock killer track “I’m Going Home”.

There are limited edition bundles (while supplies last), which can be ordered here:

For more info click on the links below:
Ten Years After
Deko Entertainment