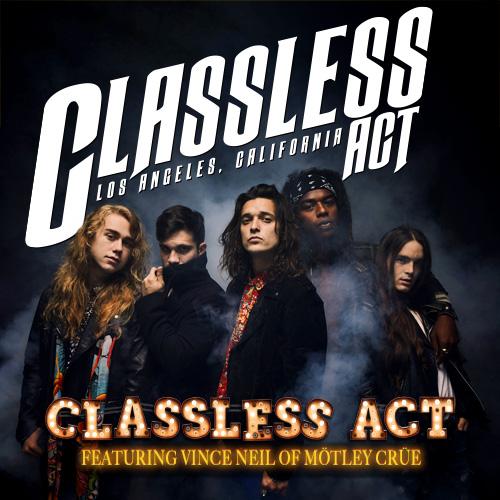 Mötley Crüe and Def Leppard summer tour openers Classless Act are continuing to enjoy a breakthrough year in 2022, today releasing a new self-titled track with the former’s Vince Neil via Better Noise Music today. The song, which was produced and mixed by the band’s bass player Franco Gravante, is set to appear on the soundtrack for THE RETALIATORS, a Better Noise Film already receiving critical acclaim, out this fall. The rising band additionally premiered the video for “Classless Act,” the third installment of their four-part video series. Derek and Vince get a little greasy singing “So sit back, relax, and witness the class of the classless act awry.” Catching the eye of Loudwire and SPIN Magazine with previously released singles “This Is For You (ft. Justin Hawkins of The Darkness)” and “Give It To Me,” the band’s highly anticipated debut album Welcome To The Show was made available for pre-order last month, ahead of its June 24 release date. Now that the band has wrapped up their run opening for Dorothy on their “Gifts From The Holy Ghost Tour,” Classless Act is gearing up to open up for Mötley Crüe, Def Leppard, Poison and Joan Jett on the North American Stadium Tour. The Stadium Tour kicks off in Atlanta on June 16 and ends in Las Vegas on September 9. See below for dates and more information. “Classless Act,” which was produced by the band’s own Franco Gravante, is available to stream and download HERE. Watch the third video of the band’s four-part video series HERE. PRE-ORDER HERE Welcome To Show now.

Lead singer Derek Day had this to say about the new track: “This song really is a musical expression of who we are. It’s a little dirty, maybe kinda sloppy and probably needs a good night’s sleep and a shower, and it absolutely kicks ass. Every night. Just like us.” When asked what drew him to the song, Vince Neil explained, “What drew me is that these are young guys playing real rock ‘n’ roll, playing their own instruments, all that good stuff that you miss from the last 20+ years. These guys remind me of Mötley Crüe growing up and they definitely rock. Can’t wait to see what happens in the future.” Directed by John Orphan, “Classless Act” is the third video in a four-part series that loosely follows the band as they set the soundtrack for the misadventures of Farley; an unlucky soul who just happens to be in the wrong place at the wrong time. Watch the official music video HERE.