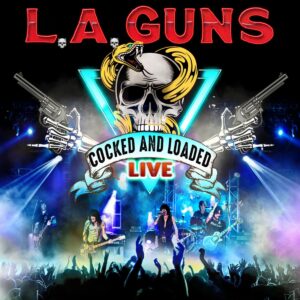 L.A. Guns, featuring Phil Lewis and Tracii Guns, have announced that they will release a new live album, “Cocked & Loaded Live” on July 9, 2021. As the title implies, the performance celebrates the band’s treasured second album, “Cocked & Loaded”. The band has dropped a live version of “Wheels of Fire.” Listen HERE:

“Cocked & Loaded Live” will precede the release of a brand new studio album from Lewis, Guns, and company, which is due this fall. More details on that in the coming weeks.

Listen to the first single from the album “Malaria” HERE:

“Cocked & Loaded” remains a gem of a truly special and unique era in hard rock music. These incredible and killer renditions of timeless songs captured in a moment and setting that none of us will not soon forget are now preserved for all to enjoy again or for the first time.