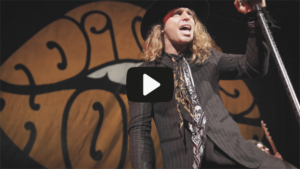 Directed and edited by the award-winning Scott Fleishman/APLUSFILMZ, Dirty Honey’s brand new music video “The Wire” was shot at various locations on the band’s current U.S. tour with The Black Crowes, and provides the viewer a laminated, All Access pass to life on the road with what one journalist called “a band at the top of the new breed of rock and rollers.”

On the tour bus…arriving at the next gig…a little sightseeing on a day off…dinner and a cigar at La Scarola…soundcheck…signing copies of their debut album for that night’s merchandise booth…an after-show celebratory night-cap at a local saloon…from the dressing room to the stage…this is Dirty Honey’s, “The Wire.”