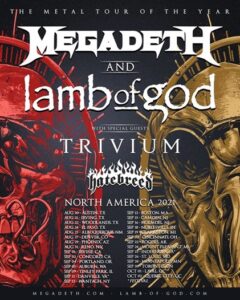 On Sunday, September 19th, the must-see LAMB OF GOD co-headline tour with MEGADETH, The Metal Tour Of The Year, will arrive at the DTE Energy Music Theatre in Clarkston, MI. Joining them will be special guests TRIVIUM and HATEBREED. Tickets and VIP packages for this most epic metal extravaganza are on-sale now from LiveNation.com

LAMB OF GOD propelled heavy metal into the new millennium two decades ago with the prophetically titled New American Gospel. They followed with 2003’s As the Palaces Burn, which made the Rolling Stone list of the Top 100 Greatest Metal Albums of All Time. Ashes of the Wake, released in 2004, was the first LAMB OF GOD album to be certified gold by the RIAA, as was 2006’s Sacrament, which also made a Top 10 Billboard 200 chart debut. In 2009, LAMB OF GOD released Wrath, their first with Josh Wilbur as producer, and earned the number one album spot on Billboard’s Hard Rock, Rock, and Tastemaker charts, with a number two position on the Billboard 200.

Those number one positions were repeated with 2012’s Resolution, which swung effortlessly between thrash, traditional metal, sludgy doom, with flashes of crust punk swagger and bravado. LAMB OF GOD’s last album, VII: Sturm und Drang (2015) made its debut on the Billboard 200 at number three and finished number 2 in the world charts, reaching Top 5 in five countries and six additional Top 15 positions.

In 2020 LAMB OF GOD released their critically acclaimed self-titled opus, the band’s best work to date and one of the best- selling metal albums of 2020. Featuring new drummer Art Cruz, LAMB OF GOD is re-energized and unrelenting, ready to lay claim to the metal throne.

The band is currently taking the show on the road having returned to the stage for the first time since the Covid shut-down on August 20th to great acclaim.

On August 20, 2021 LAMB OF GOD released the 15th anniversary digital reissue of LAMB OF GOD’s Sacrament and a behind-the-scenes look at its creation, “The Making of Sacrament” Originally released on August 22, 2006, Sacrament debuted at #8 and sold nearly 65,000 copies in its first week. The album spawned the popular track “Redneck,” which brought LAMB OF GOD their first Grammy award nomination for “Best Metal Performance.” The album was certified Gold by the RIAA in September of 2019.

The remastered Sacrament (15th Anniversary) contains the original album tracks, as well as previously unreleased bonus live tracks recorded at House of Vans Chicago in the band’s only live performance of 2020. A vinyl edition slated for early next year. The “Making of Sacrament” feature, originally included on the Walk with Me in Hell DVD, is available now here:

“Making of Redneck,” a look at the wildly fun 2006 music video for “Redneck” from Sacrament was released earlier this week. Watch the video HERE.