FLOTSAM AND JETSAM has revealed a new playthrough video for the track “Brace For Impact,” the most recent single from the group’s latest album, Blood In The Water.

“This is a fun one to play because it’s definitely a challenging picking workout,” says guitarist Michael Gilbert. “Everything from fast alternate picking to slow eerie melodic tones to compliment the rest of the music and vocals. Hope you enjoy it as much as I love playing it.”

Released June 4 via AFM Records, Blood In The Water is the fourteenth studio album from the legendary band. The blistering 12-track album was mixed and mastered by Jacob Habsen (U.D.O., Volbeat, Amaranthe, Powerwolf). Blood In The Water is available via all digital platforms. Physical copies and special editions are available at

Blood In The Water is unarguably the Arizona-based quintet’s finest, hardest-hitting release to date. “Burn The Sky,” “Brace for Impact” and the album’s title track gave fans a preview of the record, which has received rave reviews all around, with Metal Injection touting that “the guitar work… and the killer vocals from Eric A.K. should and will rip your damn head off.” Meanwhile Blabbermouth declared that “…the FLOTSAM lineup has never been stronger…” while BraveWords proclaims “…FLOTSAM AND JETSAM retains the crown of the most underrated band in metal, who should be playing stadiums at this point in their career.”

FLOTSAM AND JETSAM recently announced new live dates in support of Blood In The Water. 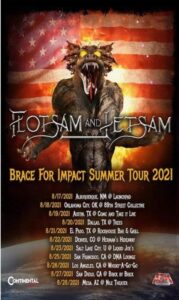 Connect with the band: