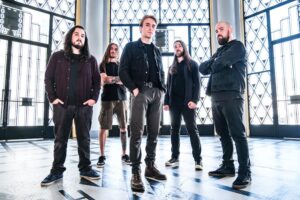 The death core metal band hailing from France known as STENGAH formed back in 2013 have revealed their debut single “Above Inhumanity” and you can view the in your face melting track here. STENGAH bring the riffs along with the face melting vibe I speak of that you expect from a true hardcore metal band and fans from around the world are taking note. The single “Above Inhumanity” released via Mascot Records / Mascot Label Group is a fragment of a full set we called ‘The Mosaic Session’ Founded by drummer Eliott Williame, STENGAH have the sound, the smarts and the ambition to push heavy music ever further into the future. After years of steady evolution and meticulous attention to detail, the band – completed by bassist Benoit Creteur, lead guitarist Maxime Delassus, rhythm guitarist Alex Orta and powerhouse frontman Nicolas Queste – have honed their sound to a state of cutting-edge perfection.

With the world in chaos, exhilarating new music has become more important than ever before. As a result, the emergence of tech-metal mavericks STENGAH could hardly be better timed. One of the most exciting new bands on the planet, the French quintet have spent the last few years in a state of perpetual evolution, armed with some of the most visceral and forward-thinking riffs and refrains in recent memory. “The music is about (re)connecting with yourself,” says Eliott. “It’s about people, their fears, their faiths and their philosophies. How sometimes those things can guide them, and how sometimes they can blind them. It asks, with no judgement, about how odd and how strange the social and emotional behaviours of human beings are. It’s all about the power to believe, in creativity, and in consciousness.”

The video for “Above Inhumanity” acts out the story of a young woman haunted by the childish depiction of a ghost – herself in a parallel dimension. Trapped in a time loop, she awakes again to find a filmstrip containing a disturbing video of a ghost following her. The video projector turns out to be a gateway between both realms. The foreboding tale sees her awake where everything appears as it really is. They add, “It’s a dreamlike narrative that makes spiritual and physical realms collapse. A story where a hunter may be a prey, and the prey a monster…” With this project we wanted to go further than just a live performance. We wanted the venue to be part of the show. The improbable fusion of a room entirely made of mosaic with our own musical mosaic ; the wide diversity of our tones and the myriad of musical genres that influence the band.

This one of a kind session was an awesome and very challenging capture made possible thanks to our epic team directed by Samuel Petit for the video and Thomas Jankowski for the acoustical engineering. The result offers a unique intimate and immersive live show with a very massive sound carried by the breathtaking echo of the room and the band in a state of trance. The band has opened many eyes across the globe and the response is overwhelming. This is a must see band once they head out on tour until then you can preorder the heart penetrating music here.

To view live performance video of Above Inhumanity click here: