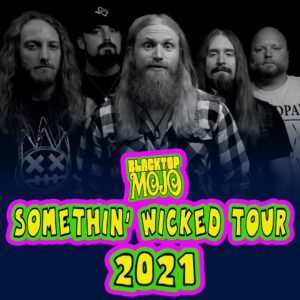 Blacktop Mojo fans get ready as the band will be performing at the world famous Machine Shop in Flint, MI on Thursday, October 28th. The band is touring in support of their self-titled 4th studio album. The album was released back on August 13th, (a killer album at that) a follow up to their 2019 release Under the Sun. The album was produced by longtime producer Phil Mosley and recorded in Nashville and in the band’s hometown of Palestine, Texas. A great track on the album is Tail Lights which you can watch here. Playing at the world famous Machine Shop is an incredible experience and Blacktop Mojo fans are in for a ass kicking night of music. Check out the official music video Wicked Women here what a banger track this is.

The Texas rockers current line up consist of vocalist Matt James, drummer Nathan Gillis, guitarists Ryan Kiefer and Chuck Wepfer, and bassist Matt Curtis. The band was founded by Matt James and Nathan Gillis in 2012. The band has come a long way in the business and the future is looking bright to say the least. The band carries a fiery attitude with a blend of heavy, sludgy grooves, classic rock guitar riffs, and southern metal shredding, add in some blues and well you have a ass kicking band, the type that delivers the turn up the radio, with the windows down on a back country road letting it all out kind of Sunday drive.

Tickets can be purchased at the machine shop here
Connect with Blacktop Mojo: