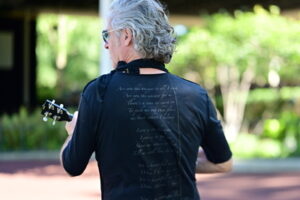 Ed Roland discovered One Golden Thread and immediately connected to the brand’s message and mission – spreading the thread of benevolence. He started wearing the beech-made apparel on tour, in studio, on photoshoots and simply in everyday life. When asked, “do you feel as good as you look?” Ed responded, “even better!”

“I love people who work for the love of humans! I love One Golden Thread, plus they’re the best cloth you can put on your body. Thanks OGT!” — Ed Roland

Meanwhile, on the other side of the continent, One Golden Thread founder Jeff Scult, a longtime Collective Soul fan, found out Ed Roland had been wearing his clothes, and immediately knew a special collaboration had to be made. The two forces of nature met for the first time at Ed’s home in Georgia to talk about what drives them to create and their vision for a better world. View this exclusive behind the scenes conversation and performance here.

“I’ve always been moved by the music and message of Collective Soul, so to discover Ed Roland has been a fan of the threads I design is pure golden synchronicity.” — Jeff Scult

Together they have co-created a lyrical “tree shirt” to express the golden thread that connects all our collective souls. Each shirt is derived from regenerative beech trees, manufactured in love shops, shipped in eco-friendly packaging and engraved in golden threads with the inspirational lyrics of Collective Soul hit songs.

In recognition of all the lives who have been touched by Alzheimer’s disease, including personal family members of both founder/singer/songwriter/producer Ed Roland and One Golden Thread founder Jeff Scult, for each limited t-shirt purchased, a tree will be planted in memory of a loved one. A portion of the t-shirt’s proceeds will benefit Alzheimer’s care, support, and research.

One Golden Thread is a regenerative apparel and eco-fashion lifestyle brand harnessing the connection between humans and nature. By sourcing material from regenerative beech trees, and partnering with One Tree Planted to plant a tree for every product sold, One Golden Thread’s impact model is to go beyond sustainability and actually give back to the planet. The company’s core ethos is to regenerate for a golden planet, galvanizing a movement for all ages to leave the Earth better than they found it. This model of benevolence threads throughout the company’s practices with fair wage love shops manufacturing their products, and eco-friendly packaging. One Golden Thread and founder Jeff Scult were lauded by Forbes for “Raising the sustainability bar for Gen R: Regeneration”.