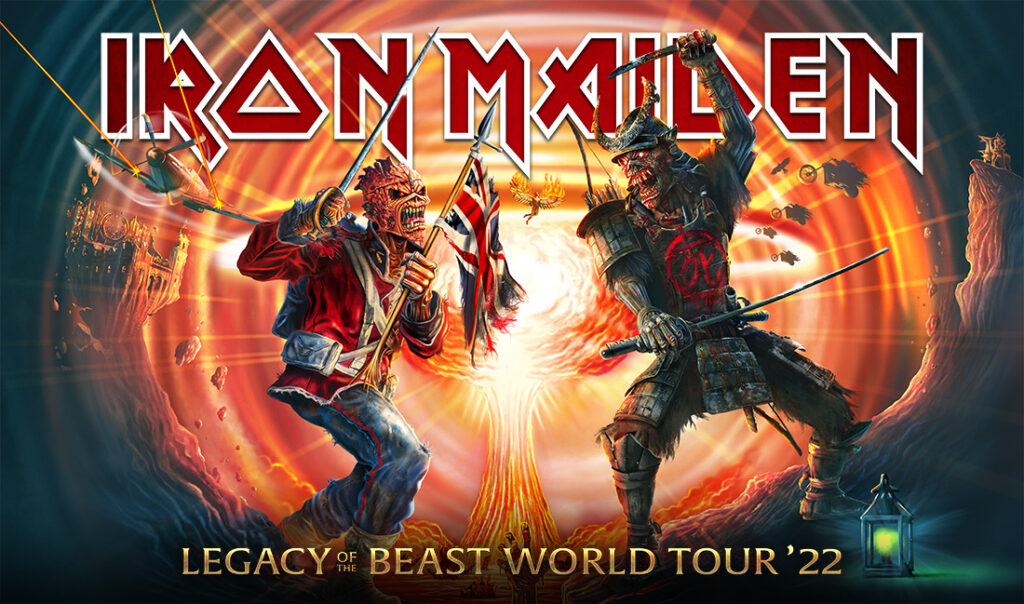 Detroit and our neighbors from Canada get ready for some fall heat as heavy metal icons Iron Maiden return to downtown Detroit on October 9, 2022 at the Little Caesars Arena. The Legacy Of The Beast World Tour to yet more cities, many of which the band has not performed in for many years. The show has already been seen by almost two million people across the globe, being hailed by fans and media alike as the most extravagant and visually spectacular performance of the band’s career to date, with a decades-spanning set list of fan favorites. The 2022 tour produced by Live Nation will also include some songs from their new studio album Senjutsu being played live for the first time.

Very Special Guests on the 2022 dates will be Trivium on all dates between El Paso and Spokane, and then Within Temptation on all dates from Sioux Falls to Tampa. Registration for first access to tickets is open now HERE via Ticketmaster’s Verified Fan platform and will run through 10:00PM ET on December 5th. Verified Fan presale begins Wednesday, December 8th at 10am local. As always there will be an exclusive pre-sale for IRON MAIDEN fan club members beginning Tuesday, December 7th at 10am local. All presales end Thursday, December 9th at 10pm local.

Any remaining tickets will go on sale on December 10th at 10am local time.

Iron Maiden manager Rod Smallwood comments, “Next summer we will finally get to play the huge European stadium tour for The Legacy Of The Beast, and the new show will be even more spectacular so after our visit to Rock in Rio early September 2022 we decided to take it back to our fans in North America too, but in cities or venues we didn’t play in 2019, including some we haven’t visited in many years like El Paso, Spokane, Sioux Falls, Columbus, Hamilton, Ottawa and Greensboro.

We’ll be making a couple of additions and changes to the production and setlist to include some songs from our new album Senjutsu and are making the 2022 version of Legacy Of The Beast even more spectacular than the acclaimed original show. You can be sure that we will still be featuring all the “hits” and the key elements of the original tour like the Spitfire, Icarus, Hell, flamethrowers and pyro and the rest – but we will shake it up a bit and Trooper Eddie will have serious competition in the new Senjutsu ‘world’ we are adding.”

Maiden vocalist Bruce Dickinson adds, “We’re really looking forward to our return to North America so we can bring The Legacy Of The Beast show to places we didn’t get to in 2019 and to other cities we’ve not played for many years. I’m really excited about the new additions and changes to the stage production and we can’t wait for everyone to see what we’ve got planned. The whole band has really enjoyed the Legacy Tour and now we just can’t wait get back out on the road to play live, have fun and see everyone again!”

A Trooper VIP Hospitality upgrade package is currently being planned and details will be announced closer to the tour dates for any fans who might want to enjoy additional at-show benefits.

“… one of the best shows I’ve seen from Iron Maiden in the last twenty years!” – Illinois Entertainer, Chicago, USA