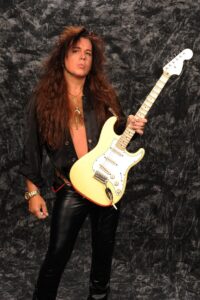 Swedish guitarist YNGWIE MALMSTEEN one of the all time electric guitar players will be performing the very best of for one night only Saturday March 20th at 7:30 PST. MALMSTEEN will be songs from his legendary catalog and the show will be both a in person live event as well as being streamed. Eddie Trunk will host this event. Yngwie’s first solo album, ‘Rising Force’ (now considered the bible for neoclassical rock) made it to #60 on the Billboard charts, an impressive feat for a mostly instrumental guitar album with no commercial airplay. The album also gained Yngwie a Grammy nomination for best rock instrumental performance. He was voted “Best New Talent” in several readers’ polls, “Best Rock Guitarist” the year after, and Rising Force became “Album of the Year”. Rising Force blazed a trail on the concert circuit that established Yngwie as one of rock guitar’s brightest new stars and added a new genre to the music lexicon: neoclassical rock.

With his place in guitar history firmly established, Yngwie’s neo-classical compositions fueled the ears of fans and the ambitions of aspiring guitarists worldwide for over a decade with such powerhouse classic albums as ‘Marching Out’, ‘Trilogy’, ‘Odyssey’, ‘Live in Leningrad / Trial By Fire’ (gold-selling concert video of Yngwie’s 1989 sold-out concerts in Moscow and Leningrad), ‘Fire & Ice’ (which debuted in Japan at #1 and sold over 100,000 copies on the day of its release), ‘The Seventh Sign’, ‘Magnum Opus’, ‘Inspiration’ (covering the music of Deep Purple, Rainbow, U.K., Kansas, Scorpions, Rush, and Jimi Hendrix), ‘Facing the Animal’, ‘Alchemy’, and ‘Attack!!’

Early in 2009, Yngwie contributed three tracks to the video game Rock Band, for both Xbox and PlayStation. Still promoting Perpetual Flame, Yngwie and the band played a series of killer concerts in Japan with rock icons Deep Purple. By mid-summer, Yngwie astonished fans and critics alike by releasing an album completely off the beaten path for him; an entirely instrumental collection of ballads from Yngwie’s earlier work performed on acoustic guitar with orchestral arrangements. To everyone’s surprise, ‘Angels of Love’ (inspired by Yngwie’s wife April) hit the top of Amazon.com’s New Age music list. 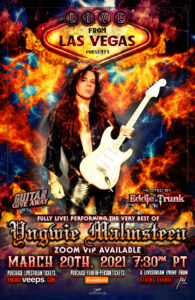