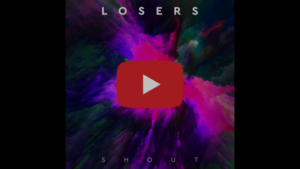 Sometimes it takes a dark period in a band’s career to emerge triumphant and refreshed. For UK’s genre-defying band LOSERS who have weathered a difficult period as a band in 2016, 2021 is already rising to phoenix-like heights. Their brand new single – a reworking of Tears for Fears’ 1985 smash “Shout” – has been prominently featured in the hit show A Discovery of Witches (S2: Ep 4) on Amazon Prime, AMC+, Sundance Now, and Shudder and is not only rejuvenating their loyal fanbase but also winning over new fans who heard their dark cover and fell in love.

“All three of us are huge fans of Tears for Fears and ‘Shout’ is just a classic,” says multi-instrumentalist Tom Bellamy.

Formed in 2007, Losers are comprised of DJ Eddy Temple-Morris, multi-instrumentalist/vocalist Tom Bellamy (formerly of The Cooper Temple Clause), and guitarist/vocalist Paul Mullen (formerly of Yourcodenameis:milo and The Automatic). Hailed by critics and fellow artists alike who reveled in the band’s ability to seamlessly merge indie electronic music with guitar rock. Losers have been so venerated that their dynamic and epically sweeping music has been heard in dozens of TV, film, videogames and sports placements including Game of Thrones, The Blacklist, Hercules, The Killing, and as the official theme music for BMX Championships London 2012 Olympic Games. The placement of “Shout” in The Discovery of Witches notwithstanding.

With big plans and new tracks plotted for release throughout the year, Losers are ready to regain their position at the forefront of the alternative rock world. “We want to take our fans on an interactive, genre-bending audio visual expedition via new and innovative platforms which we hope to announce soon,” Bellamy says excitedly. “We will be setting up live performances from the studio, ‘behind the music’ studio breakdowns and giving away remix stems amongst other things to make sure we reward our fans after such a long time away. Very exciting times ahead indeed.”

Losers are Eddy Temple-Morris, Tom Bellamy and Paul Mullen. “Shout” is available to stream/purchase on digital platforms at https://solo.to/losers and can be heard on The Discovery of Witches.