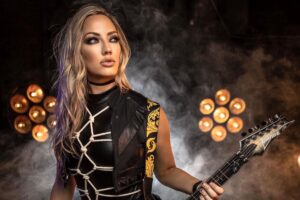 Westland, Michigan get ready to kickoff the new year with some serious guitar shredding riffs with Alice Cooper‘s guitarist Nita Strauss. Nita makes a return to Michigan in 2022. Always a sold out and a highly regarded show you don’t want to miss. NITA has not only been firmly established as one of the best guitarists in the world, she is also a role model, a trail blazer, a fitness fanatic, a phenomenal performer and a total badass. Her skill, exuberant stage presence and love for all things guitar have seen NITA become a truly unstoppable, limitless force, blazing a previously untrodden trail. As well as writing, producing and playing all the guitar and bass parts on her solo output, NITA is known for wowing fans all over the world as Alice Cooper‘s touring guitarist, gracing the covers of Guitar World and Guitar Player, performing for millions upon millions of WWE fans worldwide at record-setting pay-per-views and becoming the first female to have a signature Ibanez guitar (which now hangs in the entrance to the legendary Guitar Centre on Sunset Blvd). 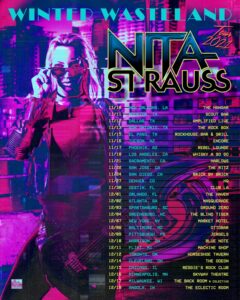 NITA released her debut solo album ‘Controlled Chaos‘ in 2018 to mass acclaim from fans and media alike with Metal Injection calling it “a great debut that—as its creator intended—leaves no doubt.” and Guitar World stating “‘Controlled Chaos‘ is a panoramic view of Nita Strauss‘ many strengths”. To date the album has clocked up 6.7 million streams worldwide, with music videos for singles “Our Most Desperate Hour”, “Pandemonium”, “Alegria” and “Mariana Trench” clocking up over 3 million Youtube views.