LOS ANGELES, CA – (Friday, July 16, 2021) – After several years of fans’ posts asking, “why isn’t this on Spotify?”, “where can I buy this?”, “please release this song!”, today the multi Gold and Platinum-selling Sabaton heeds the call and announces the long-awaited audio release of its cover of Manowar’s “Kingdom Come.” The track, paired with Sabaton’s “Metal Trilogy,” a medley of the band’s “Metal Ripper,” “Metal Crue,” and “Metal Machine,” is now available digitally on all streaming platforms, and the song can be heard here: https://music.sabaton.net/KingdomCome 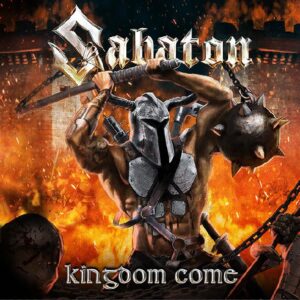 The Sabaton cover of Manowar’s “Kingdom Come” was originally released in 2016 as a track on Decades of Destruction, Metal Hammer’s special compilation covers CD that accompanied the magazine’s 30th-anniversary edition. A few months later, Sabaton and the Czech Republic video game developer, Warhorse Studios, collaborated on a music video for the track, incorporating scenes from the actual game to produce a story-driven, epic adventure – “Kingdom Come: Deliverance.” But, until today, the song has never been available as a stand-alone audio single.

Pär Sundtröm, co-founder of Sabaton and its bass player, states, “Our fans have spoken. YOU requested the release of this song everywhere, so this is for all of you. This recording was meant to be a tribute to Manowar and a collaboration with a video game bearing the same name when we recorded it a few years ago. We are happy to see that you appreciate the song so much, and we have paid attention to your wishes and requests. You asked for it, you got it.”

A week ago, on July 9, Sabaton played its first concert in more than a year, headlining the Exit Festival in Serbia. Winner of multiple “Best European Major Festival” awards, 2021’s Exit Festival was Europe’s first major music festival since COVID hit in early 2020, and Sabaton performed in front of more than 40,000 fans from some 70 countries. On September 8 in Reading, PA, Sabaton will launch its first North American tour since Fall 2019 as main support on Judas Priest’s 37-city, “50 Years of Metal” North American tour. Sabaton is also confirmed to perform at Virginia’s Blue Ridge Rock Festival and at Louder Than Life in Louisville. The complete itinerary is below; for all ticket purchasing info, visit

SABATON will be on tour with Judas Priest and making a stop at the historic FOX theater in downtown Detroit, on September 19th. 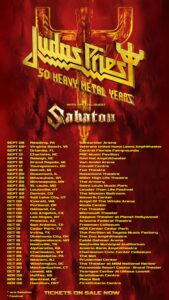