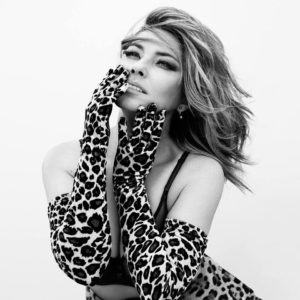 Country music lovers from Canada and all over Michigan will be getting their Twain on as Shania will be playing a packed LCA on June 15th in Detroit. The Canadian born singer, songwriter has done very well in the country business selling well over a million records making her the best-selling female artist in country music history. The Now Tour in support of her fifth studio album “Now” begins in Tacoma and wraps up late December in Dunedin. This is Shania first tour since 2015 when she said it would be her last. Shania has received five Grammy Awards, twenty seven BMI Songwriter Awards, stars on Canada’s Walk of Fame and the Hollywood Walk of Fame, and an induction into the Canadian Music Hall of Fame.

In 2004 Twain retired for the performing and the music biz all together, as years went on Shania became more and more motivated to get back on the road and did so with the recording of “Now” due September 29th will be the “Queen of Country Pop” first album since 2002. Twain debuted her new song, “Swingin’ with My Eyes Closed,” on the Jimmy Fallon show which you can view by clicking on the link provided below. Twain has done everything imaginable in her career from music, to television, to even commercials. Without a doubt Shania is one of the hardest working females in the business today. With this being her first tour in sometime you may wanna get your tickets early as they will be selling fast. You can find Shania in a town or city near you at the link provide below.

Swingin with My Eyes Closed video debut on Fallon

For all other tour dates