Detroit, get ready for some ST.VINCENT and THE NOWHERE INN makes a stop in downtown Detroit at the historic Fillmore October,20.St. Vincent cordially invites you to visit The Nowhere Inn, which opened back on September 17, in theaters and everywhere movies are rented, purchased or streamed. Co-written by and co-starring St. Vincent (a/k/a Annie Clark) and Carrie Brownstein, and directed by Bill Benz (who also directed the videos from St. Vincent’s current album, Daddy’s Home), the IFC Films metafictional feature presents an equally funny and fractured commentary on reality, identity, and authenticity. The Nowhere Inn’s multi-layered world of blurred boundaries has already agreed advance praise from the likes of INDIEWIRE (“a scalpel-sharp critique of the nature of celebrity and the madness of fame”), FILM THREAT (“a hilarious and glaringly intelligent mindfuck”) and more. For information re: how, when and where to see The Nowhere Inn, check in HERE.

The Nowhere Inn’s premiere was preceded by the cinematic sweep of the breathtaking title track for the film. The Nowhere Inn original motion picture soundtrack is now released in full, available digitally at:

St. Vincent will merge from the silver screen onto the TV screen, as musical guest on the September 21 episode of Jimmy Kimmel Live!.

Elsewhere, St. Vincent and her Down and Out Downtown band have been bringing Daddy’s Home material to life alongside staples and deep cuts spanning her catalog on her rapturously received U.S. tour—with early notices including:

“There aren’t enough superlatives to describe St. Vincent… Clark was in full glory… The dynamic range was staggering… we roared in appreciation and left thinking about how we would tell our friends that this was the best, greatest, most amazing thing since … fill in the blank.”—PITTSBURGH POST-GAZETTE

“… prompted passionate sing-alongs from the thousands of fans in attendance, and exhibited the artist’s undeniably inventive talent as a guitarist”—CHICAGO SUN-TIMES

Having begun September 3, the Daddy’s Home tour will feature headlines at Radio City Music Hall, the Hollywood Bowl and more before concluding October 22 at the Shaky Knees festival in Atlanta. See below for upcoming tour dates.

Daddy’s Home was released May 14 by Loma Vista and currently resides on the Best of 2021 So Far lists of AV Club, Entertainment Weekly, Flood, The Needle Drop, Rolling Stone, Uproxx, Variety and more. 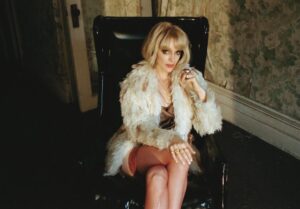