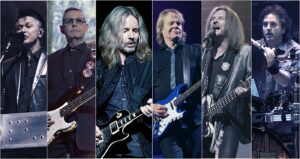 Forty eight years ago there was this rock band from Chicago, a band that went on to record seventeen studio albums. That seventeenth studio album titled “CRASH OF THE CROWN” out June, 18th that band we know as STYX. Almost five decades later Tommy Shaw and the boys are still delivering the goods, and that’s the way STYX likes it. Styx hit it big in 1977 with The Grand Illusion, which went as high as No. 6 in both the US and Canada, and became the first of four straight triple-platinum albums in the US for Styx, clearly doing it right for so many years.

The release of “CRASH OF THE CROWN” is no different. The album is truly STYX and the diehard STYX faithful are going to love it. The album is filled with vintage “STYX” guitar solos, the incredibly voice delivered by Gowan and kickass drum beats, cleverly mastered only the way STYX can. The album will quickly become your new Sunday drive album, you know top down, radio turned up on your favorite backroad. The 15 track album is yours for the taken, anyone of this song’s we can relate to, things have certainly changed over the past years and this album is all about having better days ahead. 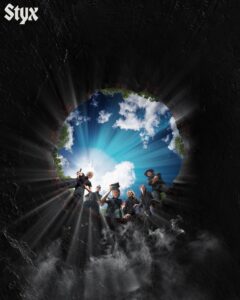 Crash Of The Crown single out now, the track sounds like Gowan is telling a story, all while singing in a deep theatrical voice, becoming a three piece harmonic finish, with Tommy Shaw and James “JY” Young, sharing in on the vocals. Chuck Panozzo and Ricky Phillips deliver an incredible display on bass throughout the album. Listening to STYX over the years you know harmonies are something this band takes in its stride and they are evident throughout the album.

A MONSTER’ track is classic STYX sounding all the way with opening keys done by Gowan, with a perfect blend of sticks put down by Sucherman with a added Shaw guitar solo completing this short track.

“Hold Back the Darkness” starts out sounding like Space Oddity from David Bowie, complimented with Gowan voice and some outstanding guitar riffs, and acoustic guitar delivering a dynamic vibe, this song has it all. The album is quite refreshing and for STYX it begins a new era.

CRASH OF THE CROWN is the follow-up to STYX’s 16th studio album, THE MISSION (their first in 14 years at the time, which critics called “a masterpiece”) which was released June 16, 2017 on the band’s label, Alpha Dog 2T/UMe. The highly anticipated two-disc reissue of THE MISSION was released on July 27, 2018 via Alpha Dog 2T/UMe, which includes a CD of the original album, as well as a Blu-ray of the album mixed in 5.1 surround sound accompanied by stunning visualizations for each of the album’s 14 songs based on the album artwork. It originally debuted on various Billboard charts, including: #6 Top Rock Albums, #11 Physical Albums, #11 Vinyl Albums, #13 Current Albums, #14 Billboard Top Albums, #16 Retail, #17 Mass Merch/Non-Traditional, #29 Digital Albums, and #45 Billboard 200 (includes catalog and streaming).

On June 12th record store day Saturday, STYX will also release THE SAME STARDUST EP on blue 180-gram 12-inch vinyl only, which will feature two brand-new songs on side one (“The Same Stardust” and “Age of Entropia”), as well as five live performances on side two of some of STYX’s classic hits previously heard during their “STYX Fix” livestreams that have been keeping fans company during the pandemic on their official YouTube page, including “Mr. Roboto,” “Man In The Wilderness,” “Miss America,” “Radio Silence,” and “Renegade.”

STYX will be hitting the road this with Collective Soul for their first-ever multiple city tour together. STYX had previously announced their return to Las Vegas with a three-night sold-out engagement at The Venetian Theatre inside The Venetian® Resort Las Vegas on September 24, 25, and 26, which will include an exclusive set list and brand-new stage production. Tickets for various cities, as well as exclusive VIP packages from each band, are available now at StyxWorld.com and CollectiveSoul.com The tour will kickoff June 16th in St. Augustine, FLA.