With less than 4 months until the kickoff of the much-anticipated Industrial Strength Tour on October 3, Ministry shares the official touring lineup that will be appearing on the 23-date trek. Ladies and gentleman welcome to the show, HELMET & Front Line Assembly.

In addition to Ministry creator and frontman Al Jourgensen (vocals, guitar), the band will include

The Industrial Strength Tour kicks off October 3, 2021 in Albuquerque and will run through November 3, 2021 in Seattle with many dates quickly selling out. The night will include special guests Helmet and Front Line Assembly for this one-of-a-kind celebration that honors not only the 40th anniversary of Ministry in 2021 but also the 30th anniversary of revolutionary album The Mind Is A Terrible Thing To Taste.

Show dates will also include brand-new material from Ministry’s upcoming 15th studio album, with news to be announced soon about its release. The tour has produced seven sellouts as of now. The tour kickoffs on October 3rd. The band is Celebrating 30 Years Of The Mind Is A Terrible Thing To Taste. 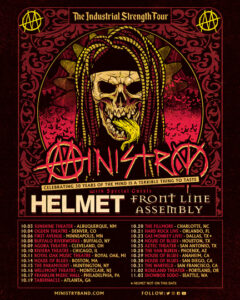