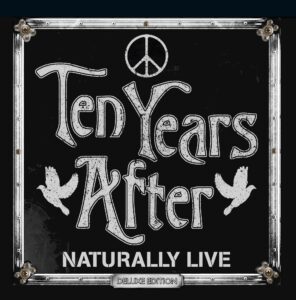 Ten Years After are best known for their Platinum selling album “A Space in Time” which featured the Top 40 hit “I’d Love to Change the World“, and their prodigious performance appearance at the Woodstock Festival in upstate New York, August 1969. Their rendition of “I’m Going Home” was featured in both the subsequent film and soundtrack album and catapulted them to star status.

Original members Ric Lee and Chick Churchill have continued this legacy and are now rounded out by Guitarist/Vocalist Marcus Bonfanti and Bass Icon Colin Hodgkinson. “Naturally Live” was recorded at HsD, Erfurt, Germany on 24th March 2018 and contains live recordings such as: ”Land Of The Vandals”, “Silverspoon Lady” & “Last Night Of The Bottle” taken from their phenomenally successful studio album A Sting In The Tale. These tracks are combined with old favorites such as “I’d Love To Change The World”, “Hear Me Calling”, “Good Morning Little Schoolgirl” and, of course, the Woodstock killer track “I’m Going Home”. Also included is the band’s semi-acoustic section of their current live show which features three tracks from the very early days in 1967: “Portable People”, “Don’t Want You Woman” & “Losing The Dogs”.

This Deluxe Edition due out August 13th also contains “I Say Yeah” which was previously only available on the vinyl edition and the previously unreleased rendition of “32-20 Blues” performed by bassist Colin Hodgkinson. Founding member Ric Lee states, “In the early days at London’s Marquee Club we did an acoustic performance where Alvin Lee played an acoustic guitar, Leo Lyons played an upright string bass, Chick played the Marquee’s acoustic piano and I went from the drum set to the front of the stage to join the guys with just a snare drum on a stand and a pair of brushes. The slot went down really well and several years later when we were playing larger venues, I suggested we played the acoustic spot again to add some variety to what we were doing. Alvin didn’t think it would work and so it didn’t happen. Much later, after Alvin had more or less retired and we had Joe Gooch on vocals and guitar I again suggested we do the acoustic set but this time Leo didn’t think it was right.

When Marcus and Colin joined us and we were discussing new material for the set, they were both very enthusiastic about doing the three acoustic songs included on the Naturally Live (DeLuxe Edition) album and it proved to be a good decision, as that part of the set goes down fantastically well with our audiences. “I Say Yeah” always sounded like an unfinished song to me so we worked out a new arrangement and it’s become somewhat anthemic and involves audience participation.

What can I say about Colin’s performance of John Lee Hooker’s 32-20 Blues? It’s a superb showcase of his amazing bass playing and vocalizing. Colin is an extremely talented and experienced musician. The people he’s played with throughout his long career reads like a who’s who of the music business. From my point of view it’s an honor and a pleasure to have him in the Ten Years After rhythm section and, to cap it all, he’s a great guy too!”.

“On this record you can hear a band that lives on its legacy but also wants to look ahead….New frontman Bonfanti further enhances the band’s rock image. Never before had Ten Years After a singer with such a rough and growling voice. With his equally rough guitar playing, Bonfanti is the rock star among the old veterans.”
BLUES MAGAZINE

There are limited edition bundles (while supplies last), which can be ordered here:
FOR MORE INFORMATION, VISIT: 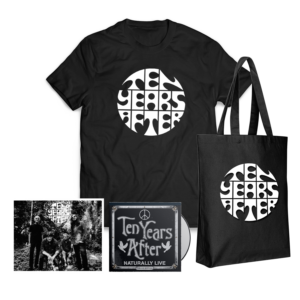