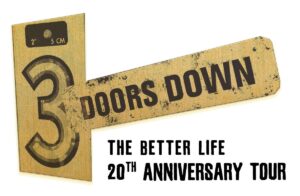 One thing that will be a bonus to all genre of concert fans will be the electrifying atmosphere that will be going on nightly. That will take place with a stop at the Michigan Lottery Amphitheatre a.k.a. Freedom Hill on August 7th. The Mississippi rock band which formed in 1995 released a remastered “Better than Life” and a nine song bonus box set. Don’t miss out on this one Detroit, get your tickets while you can.