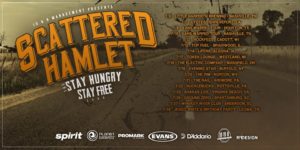 Westland, Michigan get ready to rock as the Southern Hard Rock band Scattered Hamlet makes a stop July 17th at The Token Lounge. Considered one part Skynyrd and one part Molly Hatchet they bring some amazing sound night in and night out. The band as amassed a strong underground following called “Hell Riders.” The band has played such stages as Rocklahoma, Van’s Warped Tour, and the A2 Festival in Ann Arbor, Mi. The band is touring in support of their latest record “Swamp Rebel Machine.” Video link can be found below. The band play’s a hundred plus shows a year and are no stranger to the big stage. Treat yourself to one of the best sets you will see this summer at The Token. Below you will find links to tour dates and official websites along with the video link I promised before.