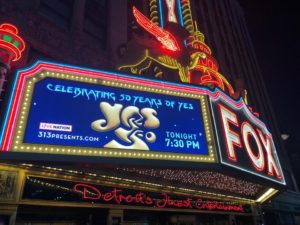 Celebrating 50 years of YES is exactly what the fan’s did at The Fox Theatre known around here as the “Crown Jewel” in downtown Detroit Saturday night. A intimate setting it was as the progressive rock band took to the stage promptly at 7:30 opening up with “Close to the Edge” which was the English rockers 5th studio album released back in 1972. Lead singer Jon Davison wowed the fan’s with his amazing voice and stage presence singing “Nine Voices“. Jon would acknowledge YES fan’s at the end of every song with a sign of a hand gesture or with a simple bow. Yes played two sets this night, during the first set Jon looked up and said this is for you Chris referring to bassist Chris Squire who passed away at 67 years of age in 2015.

During the first set guitarist and Rock and Roll Hall of Famer Steve Howe did what he has been doing for decades and that’s shredding guitar strings as he displayed serval times and even going into a kick ass guitar solo. Billy Sherwood also unloaded with a short bass solo to the delight of the crowd, and don’t forget the sounds of Geoff Downes and his amazing keyboard talent. I’ll add to his remarkable sounds of the boards as Geoff was entered into the Guinness Book of World Records performing with a record 28 keyboards on stage inn a single performance, Wow! As many of us remember he formed the band The Buggles with Horn in 1977 with worldwide success from the single “Video Kill the Radio Star”. The first set closed with a standing ovation. 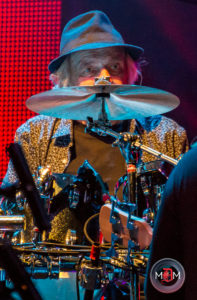 A short intermission took place with YES returning to cheers from the crowd as they opened the second set with “Perpetual Change” a track of the YES album the bands third album release in 1971 which by the way was Steve Howe first album with the band replacing Peter Banks in 70 and the bands last to feature keyboard great Tony Kaye. The second set had some special guests take the stage and the first guest to walk the stage was Alan White who replaced the original drummer Bill Bruford in 1972. Alan joined in on the song “Awaken” of the 1977 album “Going for the One” which Steve Howe help co-write. All these decades later and Alan hasn’t missed a beat. “Awaken” was the last song in the set. Yes bowed to the crowd and thanked them. It was without a doubt a incredible night of music, stage presence and a awesome lighting display. 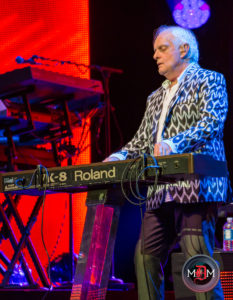 Returning to the stage to play one of the their three encore songs came the second special guest of the night which was none other than keyboard great Tony Kaye. “Yours is no Disgrace” was the song and Tony was playing with such great emotion through out. The emotions carried over into “Round About” which brought loud cheers from the Yes fan’s and continued into their hit song ” Starship Trooper” to end a memorable night at the historic Fox Theatre.