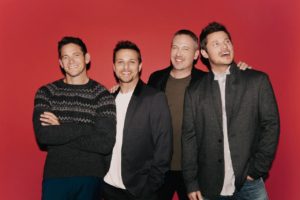 Detroit– Get ready the fans of 98° have spoken and by popular demand 98° kick’s off their high-energy, hit-filled holiday tour making a stop in Detroit on December 5th at the Motor City Casino. This years tour will be a all new show with more dates added and new cities as well. Last year’s Christmas tour was in support of their first full length Christmas album in 18 years, Let it Snow which featured the band signature R&B-tinged four-part harmonies THIS CHRISTMAS. 98° has not slowed down since last Christmas. In between the band’s busy individual schedules, they’ve headed back into the studio with new music coming next year so stayed tuned for that.

98° hasn’t cooled down in their music career dating back to 1997 through 2002 they have sold 10 million records in just a five year span, incredible for sure. They scored a chart-topping single “Thank God I Found You,” with Mariah Carey and Joe, and collaborated with their collective idol, Stevie Wonder, on “True to Your Heart,” for the 1998 animated Disney film, Mulan. Their four-million-selling album, 98° AND RISING (1998, Motown), spawned the Top Five favorites “Because of You,” “I Do,” and “The Hardest Thing,” while 2000’s REVELATION (Universal Records), which sold two million copies, peaked at #2 on the Billboard 200 and yielded a trio of hits, “Give Me Just One Night (Una Noche),” “My Everything” and “The Way You Want Me To.”

The Holiday season is fastly approaching so get your tickets now as this Detroit show will sell very quickly. Catch Jeff Timmons, Justin Jeffre, and brothers Nick and Drew Lachey on their 36 date Christmas tour. Below I supplied links to everything 98° plus a video link for “Season Of Love” and a little tour trailer link to set the mood.