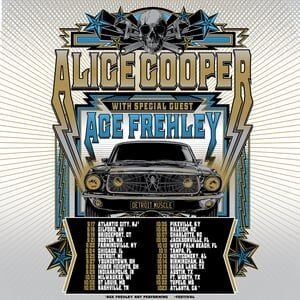 Detroit own Alice Cooper will be packing DTE Energy Music this fall with a one night stop and he is bring Ace Frehley with him. The’70s rock icons will take the stage on September 25th and guaranteed to be a heavy, energetic, rock show the fans won’t soon forget. The fall tour will kick off September 17th in Atlantic City and wrap up in Tupelo, MS. Alice will play the Shaky Knees Music Festival in Atlanta on the 23rd. With a career span around 50 years of rocking Alice shows no signs of letting up anytime soon. AC loves his time on the road and has been looking forward to doing so once again. The general on-sale is set for Friday, May 21 at 10am local time. Get tickets here.

Detroit knows all to well Cooper shows are not to be missed, a stage show like no other, something out of a horror movie. Cooper’s new album Detroit Stories is out now, the record is a celebration of the sound and spirit of Detroit rock. The album has a little bit of everything and is very well produced and ready to rock your paint off your living room walls. One track off the album that’s fun to listen to, and crank way up heading west down I-94 is Detroit City 2021, the guitar solos are spot on Alice, the 15 track album will definitely take in time. The album also features a number of Detroit/Michigan icons, including Wayne Kramer of the MC5 and Mark Farner of the group Grand Funk Railroad, along with the surviving members of the original Alice Cooper group and blues-rock virtuoso Joe Bonamassa.