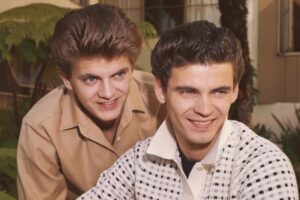 The duo left an indelible impact on both the country and rock music community, indicated by heartfelt messages of remembrance shared today:

“The sounds and images of the Everly Brothers have been greatly loved by most all Americans during that era of music, and special memories of them remain fresh in my mind. Their talent has been engraved across the world; many prayers for Don Everly’s family and loved ones.” – Janie Fricke

“Sometime back I was presenting Don with a special Buddy Holly guitar for The Buddy Holly Educational Foundation. I was able to show Don the photo of him, his brother Phil and my brother Lefty and he said, “I remember taking the photo but never seen it. We are huge Lefty fans!” Say Hello to your brother, my brother, and Heaven. God Bless The Everly’s!” – David Frizzell

“The Everlys made a huge impact on all of us singers. Their harmonies were impeccable. They had a huge impact on rock and roll’s early days. Their records are still classic examples of the art of choosing perfect songs that highlighted their talent. Don now joins Phil in rock and roll heaven. Rest in peace, pioneer!” – T. Graham Brown

“I listened to a lot of Nanci Griffith last week and I listened to a bunch of Tom T. Hall songs yesterday… Today I am cranking up some Everly Brothers… A lot of folks going home these days… Don joins Phil… BYE BYE LOVE!” – Joe Bonsall, The Oak Ridge Boys

“THIS WEEK, WE LOST ANOTHER ICON OF THE MUSIC INDUSTRY, DON EVERLY. DON AND PHIL EVERLY’S UNIQUE TWO-PART HARMONIES MADE IT DIFFICULT TO DECIDE WHICH VOICE WAS SINGING LEAD. EACH PART WAS EQUALLY IMPORTANT. REST IN PEACE, DON, WITH YOUR BROTHER, PHIL. AND, THANK YOU, FROM THOSE OF US WHO LOVE HARMONY SINGING.” – Duane Allen, The Oak Ridge Boys

“The Everly Brothers were every bit as popular as Elvis. However, like most rock acts, they were on a small record label. Cadence Records made a fortune but they were in no way able to compete with RCA which is where Col. Parker put Elvis. I met the Everly Brothers in 1969 and asked them about Buddy Holly. Phil said Buddy took the plane so he could do his laundry. I think Buddy had other laundry to do as well. This started my thinking for ‘American Pie’ which I wrote later. Additionally, Don was a great lead singer and unique rhythm guitar player. Almost all their hits featured his rhythm guitar.” – Don McLean

“Don’s voice along with the incredible sounds of The Everly Brothers was one of the main reasons I decided on a career in music. He and his music truly influenced every singer for generations. Gone but never forgotten. R.I.P.” – TG Sheppard

“So sad to hear about the passing of Don Everly. The music of the Everly Brothers helped me form my love for entertainment. First class of inductees to the Rock ‘n’ roll Hall of Fame, their blend of harmony was special and unique. RIP.” – Lee Greenwood

“I am saddened by the passing of Don Everly… one of the smoothest voices to ever come from the Bluegrass state! The harmony of the Everly Brothers was so iconic growing up. I’ll never forget one of the greatest duos in history that hails from my home state.” – JD Shelburne 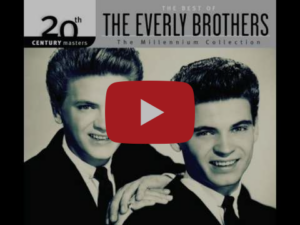