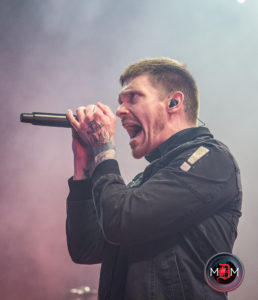 The best concert of the year happened Sunday night oh, and it was sold-out 15,000 strong. Kicking off the night was a first time band for me Like A Storm. A storm they were, opening up their set with a song titled “Pure Evil” the New Zealand rockers easy have mastered the stage bringing high energy and presence clearly shown in their second song “Become the Enemy” I highly recommend you check out the track a totally kickass song. The set was short, leaving the crowd wanting more and a very good early crowd at that. closing out their set was “Wish You Hell” ‘The Devil Inside” and “Love the Way You Hate Me.

With the crowd building so were the loud cheers for Shinedown, from the (Pine Knob) crowd which it will always be known as erupted as Brent Smith and Shinedown took the stage playing “Sound of Madness” from the bands third studio album. The passion Shinedown brings spreads to their loyal fans displayed tonight. Bass guitarist Eric Bass showed the fans what a tour opener should look like, displaying jump moves, wicked guitar licks along with high energy. Diamond Eyes (Boom-Lay-Boom-Lay Boom) the single written for the 2010 movie The Expendables, classic Shinedown. The moment of the night came when Brent Smith made his way towards me as I was looking to snap off some photo’s him tapes my camera and give me a firm handshake and continued down the line thanking the photographers. A gesture that will clearly last forever, this is Brent Smith a standout individual. “Cut the Cord” of the bands fifth studio album titled Threat to Survival what can you say other than shredding guitars, electric vocals, a favorite of mine no doubt. 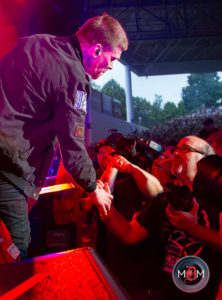 The curtain drops, to the sounds of When Legends Rise of the bands new album When Legends Rise. Godsmack took the place into a frenzy with front man Sully owning the crowd. More as a pop/rock the album doesn’t disappoint, a move that was bold according to Sully. You may even catch hints of the bands more harsher days. 1000hp was the second track of their sixth studio album Godsmack a raw track for sure every one in the band had their own stuff of this album. The band was on point all night long, Sully was looking good, greeting fans from end to end, Shannon Larkin on the kit was outstanding tonight. Keep Away is ranked No.54 in Hit Parader’s 100 heavy metal top songs off all-time. Fans in other cities on the tour will be blown away, don’t miss this show. Below I provide links to the 3 bands websites for tour dates, news, merch and more. And that was my first 3 songs review. 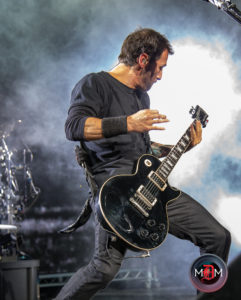