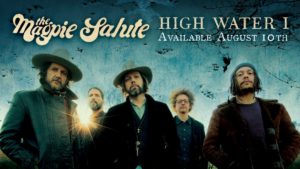 Detroit is no stranger to sound’s of The Blues or Southern Rock for that matter. On August 25th Magpie Salute will be bringing their amazing Blues and Southern Rock feel to DTE aka Pine Knob playing with Mule. If you never heard of them I’ll tell you your missing out on this one. The bands Album Titled “High Water 1” due out August 10th. Magpie Salute was formed in 2016 by former Black Crowes guitarist Rich Robinson, who also brought from the Black Crowes are Marc Ford and Sven Pipien. There is nothing not to like about MS a perfect mix of hard rock, with that blues feel, and some good old southern rock, I mean come on now.

The 12 track album is loaded with some great songs, one I give a mention to is “Send Me An Omen” pure southern rock vibes for sure. This album has a perfect blend of mix and will delight the Blues, Southern Rock, and Hard Rock fans, count on it. Not shy on bringing the energy the album also delivers true passion and some amazing vocals of John Hogg. DTE has had a lot of great concerts this year, you can file this one under the great show’s of the year. Below are some links to the Detroit show along other tour dates and merch plus a link of the song titled “Send Me An Omen”

Send Me An Omen Video Link: