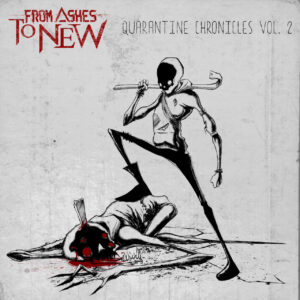 Critically acclaimed rock act From Ashes To New just released their new EP Quarantine Chronicles Vol. 2 via Better Noise Music. The intimate project is the second in their three-part Quarantine Chronicles EP series. The project consists of new music, covers, features, and previously released tracks that the band is releasing before going out on tour to reconnect with fans this summer, and this installment features a collaboration with electric violinist Caitlin De Ville. On these tracks, the band reminds fans that sometimes people think they know what’s best for us, but what’s really best is if they are banished from our lives. The final EP in the series will be released later this summer. Quarantine Chronicles Vol. 2 is now available to stream across digital platforms HERE.

The band said of the latest EP, “This second installment also carries the themes of darkness and hope, and we know our fans will enjoy the duality of this EP. We hope the music will continue to carry us through this time, as we work on our new album and connect with fans on tour this summer.”

Today, the band also premiered a new video for “Light Up The Sky” from the EP. The track is a follow up release to From Ashes To New’s critically acclaimed third studio album Panic, released last year. Watch the new video HERE.

Check out the Spotify playlist with From Ashes To New’s entire catalogue “From Ashes To New 101” HERE. Additionally, the band released a lyric video for “Bulletproof (featuring Johnny 3 Tears)” from the Quarantine Chronicles Vol. 1. Watch the lyric video HERE.

Earlier this month, the band announced they will be hitting the road this summer with P.O.D. on their “Satellite” 20th Anniversary Tour. Better Noise labelmates All Good Things are also on the line-up. For more information on tickets and dates, visit: