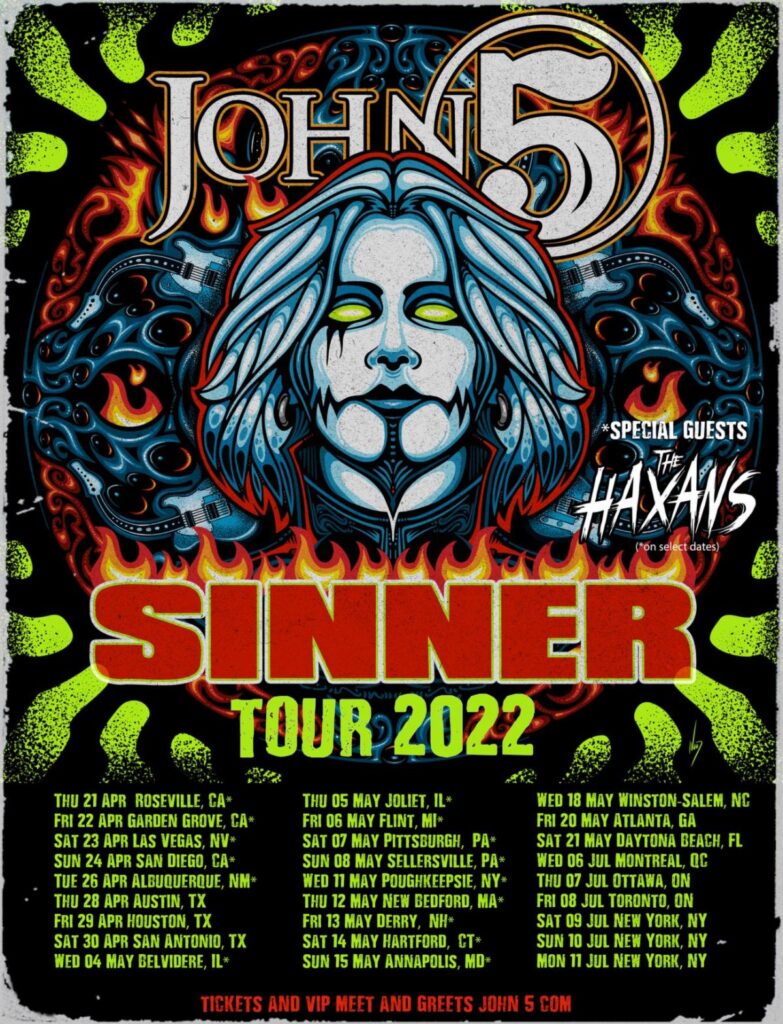 John 5 and the Creatures embark on the Sinner Tour next month. The band consists of JOHN 5 on guitar, Ian Ross on bass and drummer Alex Mercado. Opening 15 of the 27 stops are The Haxans, the spooky rock duo featuring New Years Day frontwoman Ash Costello and Rob Zombie bassist Piggy D. John 5 and the Creatures will be supporting Fozzy on some dates.

JOHN 5 shares, “I am so happy and excited to get out there on the road. It’s one of my favorite things to do in life and I am excited to see all the familiar faces. I can’t wait to play some new songs off the Sinner album and travel the country. It truly is going to be an amazing year. As for the new Dreams of Distortion documentary, I’m very excited how Mike Savage and Barry Pointer put the whole thing together and it really is a wonderful story about going after your dreams.”

The band will be recording shows along the Sinner Tour for a live album and video with San Francisco and New York shows confirmed for the live recordings so far.

JOHN 5 has worked with a varied range of artists, performing as guitarist for some of the biggest headlining rock bands in the world such as Rob Zombie and Marilyn Manson, as well as playing session with Paul Stanley, Rod Stewart, Lynyrd Skynyrd and more. Slash has called JOHN 5, “one of the most mind-blowing guitarists around” and Rob Zombie has dubbed him “a f*cking shredder”. JOHN 5 has released seven solo albums to date, as well as a remix album, and has written music for the likes of Motley Crue, Steve Perry, Ricky Martin and others.

In 2015, following a series of web shows to celebrate the release of his solo album Careful With That Axe, JOHN 5 decided to take his solo set on tour, and formed The Creatures band to support his live shows. Initially joined by long-term friend Rodger Carter on drums, the band continues touring to this day, and now work as a unit on 5’s solo albums, including Season Of The Witch, the live album It’s Alive, Invasion and 2021’s Sinner.