Skip to content
February 28, 2020 Detroit Media Magazine
Michigan will be rocking nonstop, no literally we will be this year. 2020 concerts here in Michigan is off the hook already and more dates and new announcements just keep popping up daily. Insert the heavy metal gods know as Judas Priest who will be bringing 50 years of heavy metal to Grand Rapids on September 21st at Van Andel Arena and then on the 23rd in downtown Detroit at the Fox Theatre. Both venues surely to sell-out. Playing at the historic Fox Theatre will certainly be a special heavy metal moment and if you don’t think so well you’ve got another thing comin’. The 5,000 seat venue which opened in 1928 is the perfect spot to capture a night of memories. Judas Priest will be celebrating their 50th anniversary this year with a world tour coming to the US in the fall. I’ve had the pleasure of covering Priest twice in the same year as they played the historic Masonic Temple here in downtown Detroit in March and five months later at the Michigan Lottery Amphitheater a.k.a. Freedom Hill. This tour will in my opinion will blow out the last two shows, and those show’s were absolutely phenomenal. Come on now, you possible can’t top 50 years of heavy metal. A stage spectacular for sure and taken back in time you will be.

Judas Priest is primed and ready to deliver to their faithful rockers. Judas Priest originally formed in 1970 in Birmingham, England. The original nucleus of musicians – Rob Halford, Glenn Tipton, KK Downing & Ian Hill (along with several different drummers over the years) would go on to change the face of heavy metal. Detroit get ready to raise your horns and welcome the metal god’s with some Detroit Rock City “Firepower” which by the way topped out at #5 on the Billboard 200. Checkout the Detroit link for ticket info and Priest links for merch and more. 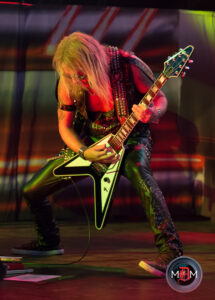