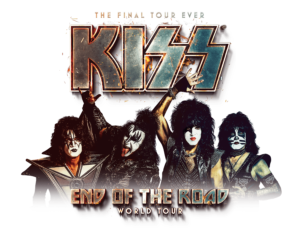 Detroit Rock City, get ready for your One Last Kiss. The band with the wild make-up and their over-the-top stage performances, are coming to Michigan with two show’s. Night one will be held in Grand Rapids, Michigan on March 9th at the Van Andel Arena, with night two moving to downtown Detroit on March 13th at the LCA. Founders Paul Stanley and Gene Simmons, alongside longtime band members Tommy Thayer and Eric Singer, will get a Farewell like no other from the loyal Kiss Army fan’s from the Detroit Rock City faithful where the band has been wowing them for decades. Selling out venues world wide over their career, this is a must see tour. The 4 leg, 2-plus hour set kicked off at the end of January and set to wrap up in December as of now.

Paul Stanley, say’s this will be a major show, one you will not forget. No doubt about it this show will be one the Kiss Army remembers for ever. Detroit and surrounding area’s including our neighbors from Canada get out and get your tickets now before they sell-out which I’m betting won’t take long. Below I have supplied a link to the band’s website for everything Kiss along with ticket info for the Michigan show’s.