After giving several tempting teases with a few singles released in the past year, the on-the-rise L.A.-based hard rock duo Satellite Citi will self-release their anticipated new full-length album Fear Tactics on September 3 – a follow-up to their acclaimed 2018 debut EP Negative Space.

Helmed by producer Brad Wood (Smashing Pumpkins, Placebo, Liz Phair, Touche Amore), Fear Tactics sonically features a wide range of inspiration from Black Sabbath to Muse to Halestorm. And the message of the album thematically centers around the importance of mental health, while also representing the band’s own struggles of coping with fear and anxiety, even more apparent in today’s culture.

“Musically, Fear Tactics is a hard rock record and undoubtedly heavier than our previous work. We strive to find a good balance between bringing back guitar riffs, and having memorable vocal melodies,” says the band.

As Huffington Post has declared of the band, “Satellite Citi are on the road to delivering audiences with music that tackles important issues that our society is facing today.”

Their latest singles highlight this focal point for the band. Released in May, “Empath” is centered around the five stages of grief – Denial, Anger, Bargaining, Depression and Acceptance – and aimed to help end the stigma surrounding mental health. The acoustic version of the song premiered via MXDWN here:

In late 2020, Satellite Citi also released “Antibody,” featuring Crobot’s Brandon Yeagley, dedicated to the people of Armenia and bringing awareness to the latest attacks on the country beginning in late September 2020 that killed hundreds of innocent civilians and displaced thousands more. See the evocative music video premiered by Loudwire here:

Preorders for Fear Tactics can be reserved via the band’s Bandcamp page:

All preorders will come with an automatic, free digital download of the acoustic version of the track “Empath.”

To celebrate the release of the album, Satellite Citi will host an all-ages album release show at Troubadour in West Hollywood, CA on Saturday, September 4. The bill also features Love Ghost and supporting acts Chasing Desolation and Hvnted.

Tickets are $15 in advance and $20 at the door, and a percentage of ticket sales will be donated to Sweet Relief Musicians Fund and the Check Your Head Podcast in support of mental health and music industry professionals in need. Masks will be required in accordance with local guidelines and the band will be giving out Satellite Citi masks at the show. Buy tickets here (including a free shirt with the purchase of 2 tickets) click here:

A regular fixture on the stages in their hometown of Los Angeles, Satellite Citi is joined live by two anonymous Spacewalkers on bass and guitar that further taps into the band’s curiosity of other realms and advanced life forms. The band’s name, in fact, is based off of the idea of a city, outside of our galaxy, where people communicate with their minds.

In addition to music, Anna and Shaunt love video games and writing—they are currently working on their first original sci-fi graphic novel called Spacewalker with former DC editor Jim Higgins, that will coincide with a new concept EP in 2022. Satellite Citi also has five songs featured in the recently released rock documentary Long Live Rock…Celebrate The Chaos, directed by Jonathan McHugh, that features bands such as Metallica, Korn, Slipknot, and Rob Zombie. The trailer can be viewed HERE. As well the band’s song “Getaway” is featured in the new show “The Freak Brothers.” 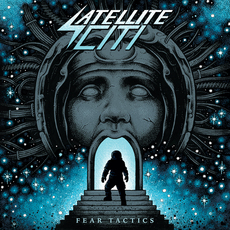