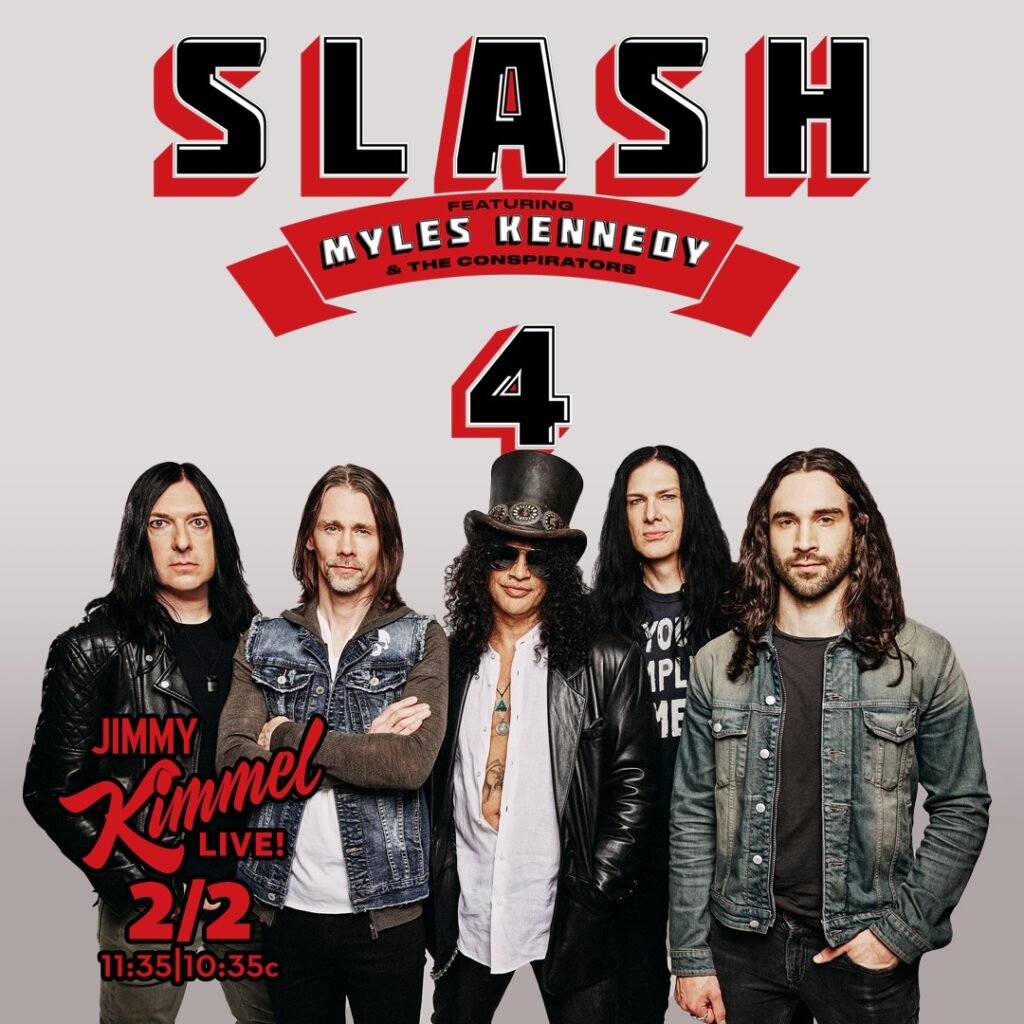 Detroit and our neighbors from Canada and all across the state will be out in full force and ready to rock and roll at the historic Fillmore. Before that checkout SLASH and his band, SLASH FT. MYLES KENNEDY AND THE CONSPIRATORS will perform their new single “The River Is Rising” this Wednesday, February 2 on “Jimmy Kimmel Live!” Tune-in on Wednesday night (Feb. 2) to watch SLASH sit down with host Jimmy Kimmel for an interview and catch the band hit the stage to perform “The River Is Rising” on live TV for the first time airing at 11:35PM (ET/PT)/10:35PM (CT) on ABC TV and Hulu.

The vibrant hooks and anthemic, choruses of “The River Is Rising” — which Guitar World described as “un-tapping a raucous post-lockdown live energy” (10/22/21) and Revolver hailed as “rollicking” (10/22/21)–make it a standout on the group’s forthcoming new album titled 4. The song is #8 on the Rock Charts this week and is the eighth consecutive Top 10 radio single for SLASH FT. MYLES KENNEDY & THE CONSPIRATORS. Listen to “The River Is Rising” HERE, watch and share the new video HERE; pre-order the new album 4, HERE. 4 — due out February 11 via Gibson Records (in partnership with BMG) — is the new full-length offering from the band, which in addition to SLASH and singer MYLES KENNEDY, includes bassist TODD KERNS, drummer BRENT FITZ, and rhythm guitarist FRANK SIDORIS. 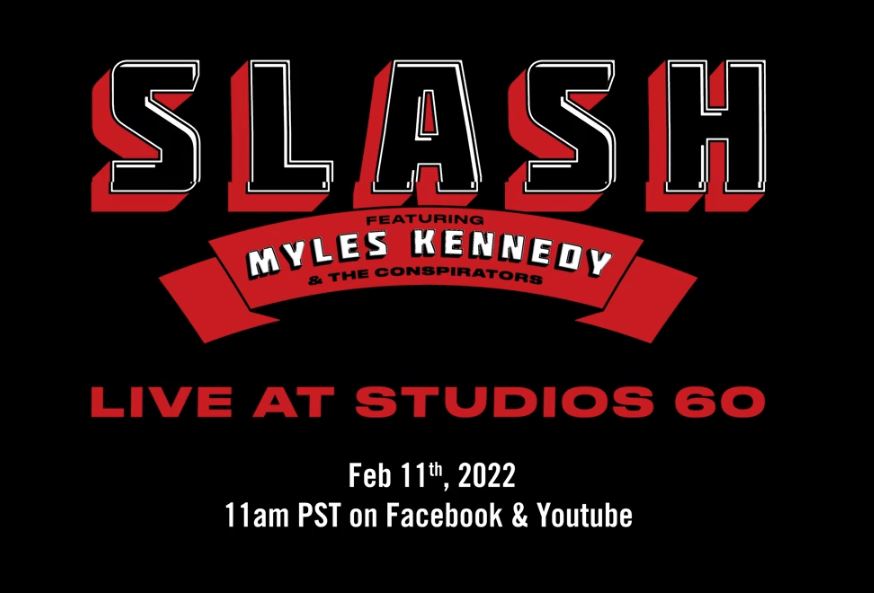 On Friday, February 11, in celebration of the album release day, tune-in to watch the global premiere of the SLASH FT. MYLES KENNEDY & THE CONSPIRATORS concert “Live at Studios 60” where SLASH and the band will perform the new album 4 in its entirety. The SMKC “Live at Studios 60” concert event will stream live and free on the SMKC YouTube and Facebook at: 11am PACIFIC / 2pm EASTERN / 7pm GMT. The concert will be immediately followed by a Live Q&A afterparty with SLASH exclusively on YouTube Premium. To join the afterparty and live Q&A, fans can sign up for a free, YouTube Premium one-month trial at

Catch SLASH FT. MYLES KENNEDY & THE CONSPIRATORS live on the road for their U.S. headlining tour which launches on February 8 in Portland, OR, and will hit 28 major cities nationwide, including Los Angeles, New York, Boston, Philadelphia, Chicago, Denver, Nashville, Dallas, Austin, Houston, and more, as well as the newly announced Detroit, MI show on March 4 at The Fillmore. All tickets for the SMKC U.S. tour are available at: Info for the Detroit show at the Fillmore click here: 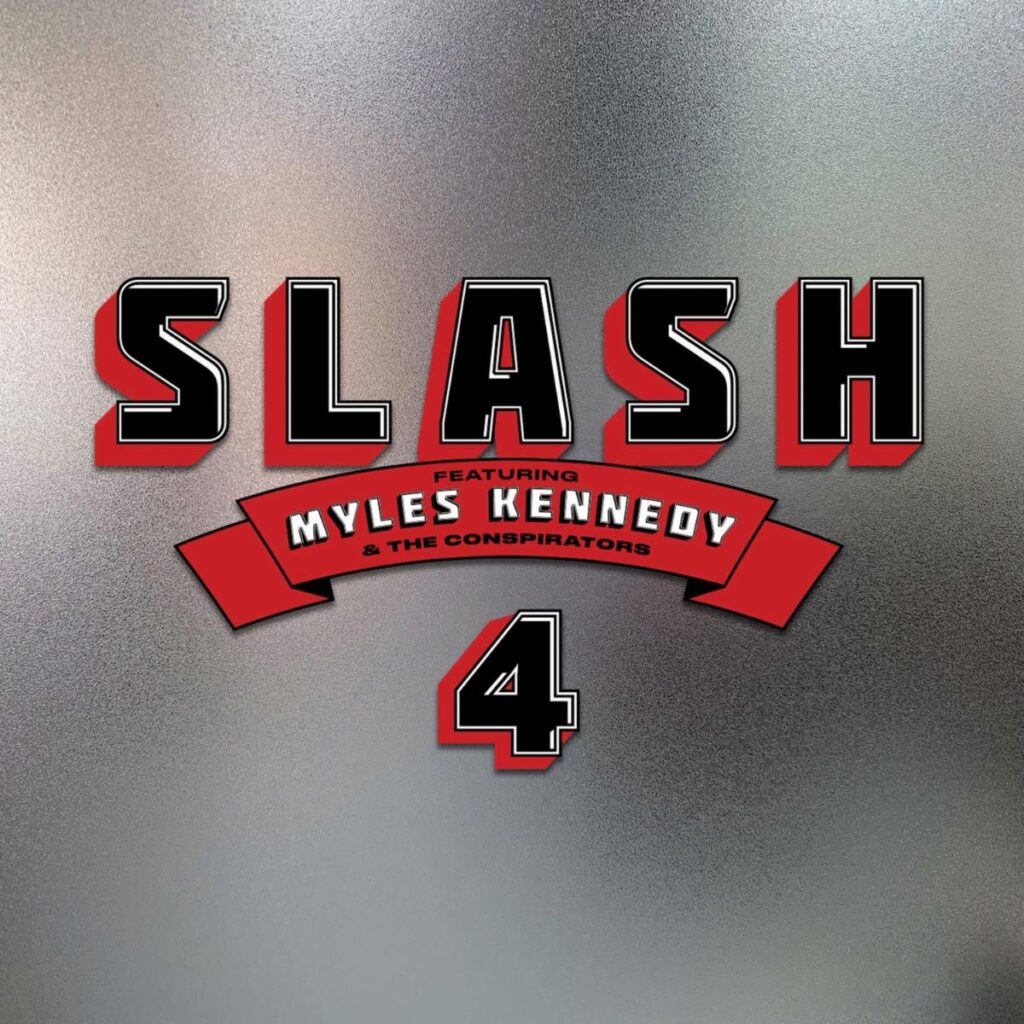