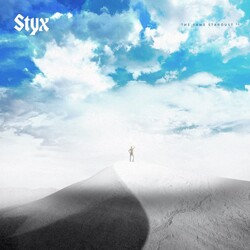 Shortly before their “masterpiece” new album, CRASH OF THE CROWN, came out earlier this summer, legendary multi-Platinum rockers STYX released new music on THE SAME STARDUST EP as part of Record Store Day (Saturday, June 12). Available on blue 180-gram 12-inch vinyl only, featuring two brand-new songs on side one (“The Same Stardust” and “Age of Entropia”), as well as five live performances on side two of some of STYX’s classic hits previously heard during their “STYX Fix” livestreams that have been keeping fans company during the pandemic on their official YouTube page, including “Mr. Roboto,” “Man In The Wilderness,” “Miss America,” “Radio Silence,” and “Renegade.”

Their 17th album, CRASH OF THE CROWN, was released June 18 on the band’s label, Alpha Dog 2T/UMe, as clear vinyl, black vinyl, CD, on digital platforms and on Styxworld.com. It debuted at #1 on the Billboard Rock Albums chart and #5 on the Top Current Albums chart.

A new era of hope, survival, and prosperity comes calling with the release of CRASH OF THE CROWN, which was written pre-pandemic and recorded during the trying times of the pandemic.

Efforts to record THE SAME STARDUST and CRASH OF THE CROWN began in earnest at Shaw’s home studio in Nashville during the fall of 2019, with Gowan — STYX’s criminally minded showman extraordinaire and keyboardist/vocalist since 1999 — in the room together with Shaw and the album’s producer, Will Evankovich, as he conjured up the album’s first song to be recorded, with cosmetic flourishes that reign over the insistent, yearning call for togetherness, “Common Ground.” But the global pandemic that inevitably transformed the way we all wound up living in 2020 changed the course for how many of the band’s home-and-away recording sessions ultimately had to set socially distanced sail. Safety precautions took precedent for all involved STYX bandmembers and production compatriots with much diligent quarantining and testing required before any one of them could travel to Shaw’s tranquility homebase to spread the uniquely ingrained STYX stardust that’s been duly sprinkled across the album’s cosmically chosen 15 tracks.

Of all those who made the trek to Nashville, original STYX bassist Chuck Panozzo — who, along with his late twin brother, drummer John Panozzo, formed the initial nucleus of STYX when they began jamming together in their basement on the south side of Chicago in 1961 — is hands down the most effusive about the experience. “I’m constantly amazed at how Tommy’s songwriting continues to connect with the social consciousness that spans across generations,” marvels Chuck, who plays on “Our Wonderful Lives” and “Lost at Sea,” Lawrence’s all-too-brief aquatic fever dream. “Both he and Will have been able to tap into the core elements of the human condition, which is something that’s not going to change that much in 50 years — or even 500 years. That’s why STYX remains relevant after all this time, because we’re part of the human condition.”

CRASH OF THE CROWN is the follow-up to STYX’s 16th studio album, THE MISSION (their first in 14 years at the time, which critics called “a masterpiece”) which was released June 16, 2017 on the band’s label, Alpha Dog 2T/UMe. The highly anticipated two-disc reissue of THE MISSION was released on July 27, 2018 via Alpha Dog 2T/UMe, which includes a CD of the original album, as well as a Blu-ray of the album mixed in 5.1 surround sound accompanied by stunning visualizations for each of the album’s 14 songs based on the album artwork. It originally debuted on various Billboard charts, including: #6 Top Rock Albums, #11 Physical Albums, #11 Vinyl Albums, #13 Current Albums, #14 Billboard Top Albums, #16 Retail, #17 Mass Merch/Non-Traditional, #29 Digital Albums, and #45 Billboard 200 (includes catalog and streaming).