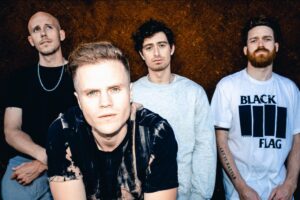 Los Angeles-based alt-rock outfit DEAD POET SOCIETY have released the video for their song “I never loved myself like I loved you,” which is featured on their debut album -!- (said as “The Exclamation Album.”). Watch it here.

The video is an impromptu, one-take affair, which sees lead singer Jack Underkofler slowly unravel as he walks the streets of L.A.. Like much of -!-, the video highlights the emotional and self-reflective adversity that the band exercises through their music.

“This video was completely shot by accident,” the band explains. “We were in the process of pre-production, getting test shots with our iPhones. We improvised a possible scene and ended up capturing a moment that resonated with us all so strongly that we felt we had to release it as the actual video itself. It’s not perfect in terms of its aesthetic or technical value, but the imperfection is what this song is about. For us, this video captured the exact emotions and feelings that went into writing this song, and that’s what matters.”

Dead Poet Society are receiving some well-deserved recognition on the strength of their new album. The record’s lead single, “.CoDA., ” is the band’s first track to chart in the Top 25 at Active Rock. The band also announced its first tour of 2021, supporting their longtime friends in Badflower on a North American run this fall.

LISTEN TO DEAD POET SOCIETY:
Into Deep
CoDa
Love You Like That